Politics and the Nation.

Just like fans and spectators, including studio analysts castigates and call for the exclusion of a certain player in a team, but the Coach keep faith with that player for whatever benefits he (Coach) knows the player is bringing to the team, so also is this man in the APC and in PMB’s government.

If anyone cannot see what Akpabio has done to safe this government and country from total collapse in the last two weeks, then let us as crises managers inform you that, Akpabio just pulled yet another great save that yet again, saves PMB and the APC government... FriendsOfNaija

Politics, like the game of football is a very interesting and surprising vocation. Most times, you don’t have to be the best of players, but the strategy adopted by your team and the role allocated to you can make you very relevant in wining against the very bests. In a nutshell, politics, like football, the team you play with, and the players in your team makes the lots whole of the difference in saving the head coach’s head. The Honourable Minister of Niger Delta Affairs, Senator (Dr) Godswil Obot Akpabio as a member of the APC political party has pulled two very important saves that have saved President Mohammadu Buhari’s (PMB) political career, and keep the APC’s government in the game. Just imagine if Akpabio did not do these two things! 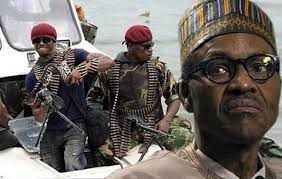 Akpabio’s efforts have bought more time for the President and the APC government to figure out how to checkmate their opponents and the mirage of challenges facing our country. Hate him, or love him, he is a member of a team, and he must help his team to win. Senator (Dr) Goswil Obot Akpabio by his antecedence is a man, whose name rings bell in the Nigerian political scene. When the news of his decamping from his former political party, the party where he was a huge factor was announced, many felt he had nothing to offer PMB and the APC, who were at that time grabbling for any saving last straw to survive, after a near disastrous first term. With prominent party stalwarts crossed-carpeting back to the PDP in drowns, and pundits predicting that it was going to be just a matter of time before the APC broom scatter completely, their house come crumbling on PMB, and his government coming to an abrupt end, something huge and awe needed to be done, and quick. Then in the twinkle of an eye, when everyone least expected it, WAM! Akpabio decamped to the APC. And either you accept it or not, that singular decamping was the one breathe of hope that resuscitated PMB’s re-election bid, and stabilized the country at that material time. 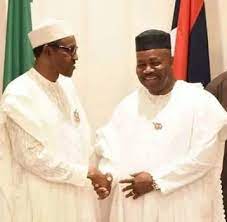 Then PMB and the APC managers, like a football coach and his coaching staff that understands from which angle their victory emanated from, offered him (Akpabio) a contract, and brought him into the Executive Council as a full player, having delivered in his trial. The former governor, whose giant strides and foot-prints in governance has not been matched by any single individual yet in the country was appointed the Minister of Niger Delta Affairs, an appointment, his enemies and critics felt he didn’t deserved, having just come into the party. But PMB, like the wise coach of a team, who knows the kind of players that can deliver on his governance and country’s stabilization objective, nonetheless, retained him. 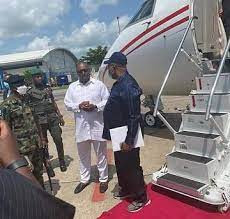 If anyone cannot see what Akpabio has done to safe this government and country from total collapsing in the last two weeks, then let us as crises managers inform you that, Akpabio just pulled yet another great save that yet again, saves PMB and the APC government in his recent negotiation with the Niger Delta Militants, who had threatened resuming bombing of oil pipe lines and other facilities of the petroleum industry. And this is what we should be talking about now, not some old house wives story. Whether he adhered to the law or not, is immaterial right now. If that threat was allowed to happened in the face of IPOB threat in the South East, banditry in the North West and North Central, and the perennial insurgency threat in the North East of the country, tell it to the marines that Nigeria and PMB would have still retain the little hope of a continuous country today!. Don’t forget that oil is the life line and the mainstay of Nigeria’s economy, in the midst of all these threats to only one government, a collapse of our economy would have signified the helplessness and hopelessness of the continuous existence of Nigeria in the midst of diverse threats from several fronts. This Niger Delta militants threat is one threat Nigeria don’t need and should make it a priority if we still want to have this great country.