And the People of Abama Got Their Palliative From Their Friends, The Exceeding Love Mission, Commonwealth of the Dominica 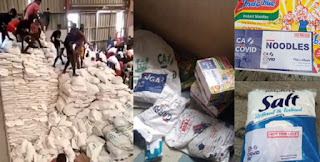 The word “Palliative”, like “subsidy” became popular in Nigeria and world’s lexicon in 2020 after the outbreak of the covid19 pandemic. In as the word became popular, so also are the people and organizations that initiates the idea and decision of handing over the palliatives to the needy as their social responsibility. While it is very important that those in advantage and well to do position extend love and share with those in disadvantage position, it also become very necessary for security sake, that origins of palliatives are traced, tracked, known and certify that they are not coming from mischievous people with ulterior motive. 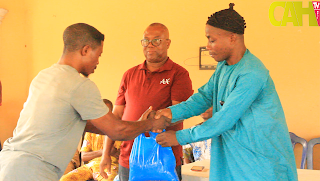 Recently in far away Abama community in Obot Akara Local government area, Akwa Ibom State, South-south Nigeria, Mr. Monday Tom Udoh, an optician by profession handed out food items palliative to his people, the people of Abama. Speaking to your IKPNews crew in his country home, Mr. Tom said he became encumbered with the plight of his people during the recently locked down and reached out to some group of people in far away Common Wealth of Domica from where the palliative came.

Admonishing the lucky recipients, Mr. Tom, who is popularly referred to as Engineer, told them to make do with the little they received and to remain hopeful that more would come from his friends, the NGO mission from the Common Wealth of Dominica, call Exceeding Love Mission. Speaking on behalf of the people of Abama, the village head, Chief Idoreyen Ekanem Udoma thanked the Exceeding Love Mission and Mr. Tom, whom he described as a brother who love his home and people. The Chief called on those that are well to do to always look down with compassion and love to the down trodden.
at January 04, 2021