HUMAN RIGHT ABUSE, EVEN THE NIGERIAN POLICE ARE NO LONGER FINDING IT EASY LATELY!

The saying that the worse form of civilian rule is far better than the best military regime is truly beginning to hold up in our country, Nigeria, despite the many hiccups and the seemingly lack of progress in our democratic experience in the last twenty one (21) years. The reality of human right abuses by the police and other security agencies across the country has been and is still one major challenge of our country, which is supposed to model civilization and decent conduct to other black race. But the cheering news from a very reliable source from the Nigerian correctional service, also known as Nigerian Prison Service (NPS) is that the Nigerian police force has been so embarrassed recently by the outcomes of their prosecutions and other human right related cases, and are paying damages left, right and centre in several courts across the country. 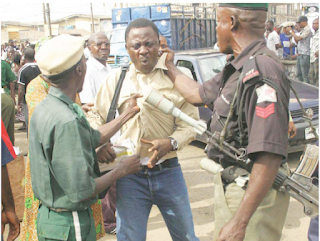 The Nigerian Correctional service personnel, who crave anonymity revealed to your Nigeria friendly news hub, FriendsofNaija that the police leads in every agencies currently paying damages to the people they violated in courts across the country, reiterating that modern development has made it impossible for the men of the Nigerian Force to get away with right abuses as before. He further revealed that police divisional heads and formations are not taking it lightly anymore with their personnel on the roads and field who feel that it is their right to oppressed citizens because they have guns and are wearing uniforms, as some of the stains may rob on them if anyone they abused decided to seek redress in the court. He admonished the people to always, no matter how difficult, seek the interpretations of the acts of security personnel on them, pointing out that though it may seem nothing is happening, but that it has not been business as usual in the last five years.