UYO TO YOLA BY ROAD, IMMIGRATION CHARGES N1000 FOR NOT HAVING YOUR NATIONAL IDENTITY CARD.

Travelling from the Nasarawa Park of Uyo to Yola or from the Yola’s Jambutu park  to Uyo by road, apart from the annoying deplorable state of the federal high ways, the other twin doom of the Uyo to Yola road journey is the incessant stoppage at check points and road blocks by men of the Nigerian security forces, one at every five minutes drive at a time I was counting it looks, and each with their different interaction pattern with the drivers, some passengers that frequent that road, response along. 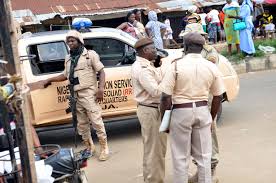 One very important feature of the road journey is the discovery that the Nigerian Immigration Service in Taraba, Chukura town, with their branded hillux truck carrying the inscription “Border Patrol Corps Base, Takum” were charging and receiving #1000 each from passengers that don’t have their national identity card, except for much pleading and much wasting of time would they accept to collect less. I have travelled from Uyo and from other cities of the federation to Abuja, Lagos and other states, never have I seen any security agent having a fixed rate the extortion they extort as penalty for violation, revenue they don’t even get to remit to the government.

At the military check points, you just handover the understanding without negotiation, amount ranging from constant 50 or 100 naira. The police- same, the mopol, the custom, including the road safety that would imposed a particular sum like their Immigration counterpart, the vio, vigilante and every other uniform organization you can think of are seen on the high ways of uyo to yola vis avis journey by road, as they add wasting of precious time to the already long distance journey. The immigration’s module brings everyone down and insists on seeing your national identity card, work place id or student id. Those that don’t have are billed N100 flat rate, or we die here. It is then that the driver, after much plea would announced that everyone must handover N500 so that he would complete the rest and go. OnlyIn9ja