ALLEGATION OF APPOINTING HIS SON SENIOR LEGISLATIVE AID, SENATOR EKPEYONG’S SON OPENED UP TO CLEAR THE AIR, CALLED FOR PEACE AND CONCERTED EFFORT TO ATTAINED DEVELOPMENT.

Rumour, they say is always started by enemies, spread by ignorant people and believe by fools. This is the case with the controversial allegation of nepotism against the Senator representing Ikot Ekpene Senatorial district of the oil rich state of Akwa Ibom state, South-South, Nigeria. 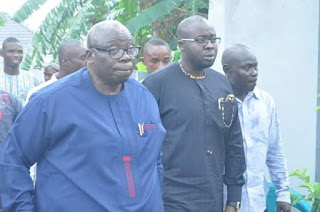 All things being equal, except for mischief makers and propaganda/falsehood merchants, the controversy raging in some quarter of the social media that the Senator representing Ikot Ekpene Senatorial district, Senator Chris Ekpeyong has appointed his son, Mr. Emmanuel Ekpeyong as his Senior Legislative Aid supposed to be finally and permanently put to rest with the reaching out of the Junior Ekpeyong to clear the air and to educate the public. Mr.
Ekpeyong Junior, who cut a picture of a all round knowledgeable mature, coordinated, tactful and non vindictive crises manager, reached out to us, after we have sufficiently peddled same news of the alleged nepotism accusation against his father to set the record straight and to educate the public on the constitutional workings of the appointment of staff of the Senator of the federal republic.

Young Ekpeyong, whom we had thought would have remained in the trench and hauled stones back at us in retaliation for daring to criticized his father, like most of the people around him, who are actually responsible for stocking the fire for acrimony and misrepresentation, choose rather to go diplomatic, by peacefully reaching out to us to point out the true picture of things and call for understanding, unity and collaborative concerted effort to achieve development in Ikot Ekpene Senatorial district, Akwa Ibom state and Nigeria. Here is Mr. Ekpeyong’s rebuttal of the false allegation, and the true picture.


Good evening...I came across a post you made on Facebook stating how Sen. Christopher Ekpenyong appointed his family relatives as his aides.Well, I wouldn’t have bothered writing this to you. But remembering that we’ve once had an encounter, I feel quite sad that someone I actually thought was of the same school of thought with me will reason the way you do.

I think we’ve gone past this phase of blackmail, and it hurts when it comes from a brother. We shouldn’t throw sand on a man who has been through alot, all because he decided to take up the cross to help his people.You’ve castigated me overtime, and I’ve kept quiet. Elections are over, we have a Senator and a Minister to the Glory of God, I feel instead of fanning the ambers of discord, we should be able to make our leaders see beyond self-glory and pursuit for power. Rather, focus on how both offices could be utilised for the betterment of our people. God bless!
at November 12, 2019