Irresponsible journalism and lack of patriotism Army Called out Journalist with Vested Interest.

A man is said to be patriotic when his heart beats truly in love and objectivity for his country, but this patriotism characteristic cannot be found with many a media practitioners in Nigeria, as they deliberate set out to undermined and portray our Army, whose relentless sacrifices in many fronts remained the one remaining fabric that is holding the country as one. 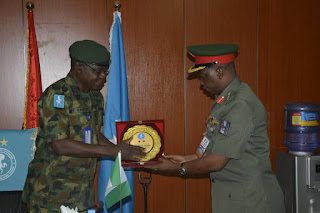 The Acting Director of Army Public Relations, Col Sagir Musa has frowned at and call out some of the country’s media practitioners, most especially journalists and social media critics with vested interest, who in some situations unjustifiably accused the military and under report her achievements, but to their degradations and shame, glorify and hyped on the exploits of terrorists and other criminal elements in the society. The Army top spoke man, who was speaking at the opening ceremony of the Directorate of Army Public Relations combined second and third quarters study period, which commenced in 1 Division Headquarters, Kaduna, on Monday, further advised journalists to desist from unprofessional conduct of publishing unverified stories or fake news in their reportage.

Col Sagir did not fail to acknowledge and thanked the responsible media practitioners in the country for their understanding and support so far. The Colonel called on those fond of negatively reporting and presenting the Army in bad light to desist from such and be more responsive, maintaining that such negative reportage, championed by some of the country’s media practitioners, most especially journalists and social media critics with vested interest has the potential of affecting the morale of troops in the front line fighting terrorism and other criminal elements in the country, observing that the Nigeria Army has performed excellently in checkmating the activities of terrorists and bandits across the country in the last four years. 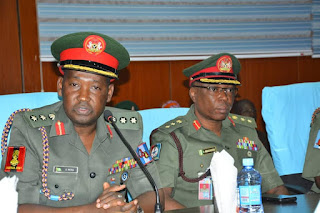 Encouraging the participants, the Army spokesman, Col. Sagir Musa pledged that the Army and Army Public Relations in particular would never be deterred by negative reporting. “The Army and indeed DAPR shall continue to do our best in the promotion of Human Right and must not allow negative reports circulated in some media platform affect our genuine efforts in serving the nation selflessly”. The Army’s acting PR Director assured.
Revealing the aim of the study period hosted by 1 Division, Nigerian Army, Col Sagir pointed that out that it is to galvanize active participants and personnel of the Directorate in the understanding and projecting the towering image of the Nigerian Army activities. 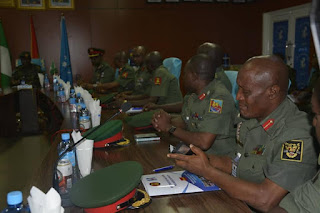 Col Sagir admonished participants to take advantage of the interactive session to engage each other with a view to enhanced knowledge through proactive coverage of Nigerian Army events in line with the vision of the Chief of Army Staff, Lieutenant General Tukur Buratai, which is “To have a professionally responsive Nigeria Army in the discharge of its constitutional role”. The Army image maker top notch, expressed his gratitude to the Chief of Army Staff for his support to the Directorate of the Army Public Relations (DAPR) since he assumed duty in July 2015, as the country’s Army head.

In his remarks, the Chief of Army Staff, who was represented by the General Officer, Commanding 1 Division, Nigerian Army, Maj. Gen. Faruk Yahaya tasked the Directorate to lead the fashion of better innovation that would promote effective civil-military relations and Nigerian Army operations.
The weeklong event with the theme “Strengthening the Nigerian Army Public Relations’ capacity in Managing Information in contemporary warfare” is expected to end in Friday, 26th of August, 2019. It has notable resource persons of the Army like Maj. Gen. Chris Olukolade (rtd) Brig. Gen. Sani Kuksheka Usman (rtd), Brig. Gen. John Akim (rtd), including spoke persons of other security agencies (serving and retired) in attendant. Etc.