Financial institutions in Ik should do their work, for without the people’s money you would be jobless and Ikot Ekpene people are not less a people than their fellow compatriots living in Lagos, Abuja, PH, Kano and every other place. 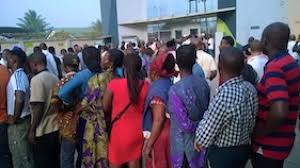 To say that we are our own problem in this country is merely but stating the obvious, in a country where everyone uses the slightest opportunity or privileged position they found themselves to oppressed others, as witnessed with almost everyone in this country, from the politicians, civil servants, security operatives, and everyone behaving as it pleases them without fear of God, regulatory agencies/bodies looking the other way, feigning as all is well and only bearing the name (regulatory agency), we can only but hope that one day, a truly discipline government that truly understand the concept of government and care for the people would come on board and insists that sectors or service providers carried out their services, to which purpose they exist, to the people.

Despite the giant stride made by the government of Akwa Ibom state and some private individuals in providing infrastructure to give Ikot Ekpene, the oldest LGA in Nigeria the status she deserved as a metropolitan city, financial institutions and security operatives in the city continue to undermine her. Apart from GT bank that is not in Ik, as the city of Ikot Ekpene is commonly called, all the other financial institutions exists in the city, but the routine service they provide can only be best confound to the refuse dung, as personnel of these financial institutions only goes around with air of importance as if they are doing the people a favour, doing their work.

Yesterday evening, the 1st working day of the week I decided to go and get some of my own money from the automatic teller machine, (ATM), I got to Diamond bank on Aba road first; with over five ATMs operated by the bank, only one was working, with a massive queue. The only one ATM working, only worked for, may be just one hour or less and then shot down for the day, a Monday. We now all migrated like colonies of birds to Zenith bank, still on Aba road. On getting to Zenith bank, one staff of the bank was busy feeling as if he is saving the world, doing his own work, which he gets paid for. We waited and wasted over two hours, as the Igbo guy told everyone that he is loading the money on the ATMs, at last he left without loading the money because one of the customers inserted his card against his order that they should wait. HE LEFT AND THE PEOPLE WITH THEIR MONEY COULDN’T DO A THING. That was the point I couldn't take it any longer, and I left. Banking service at weekends in Ikot Ekpene is nothing to write home about. Financial institutions in Ik should do their work, for without the people’s money you would be jobless and Ikot Ekpene people are not less a people than their fellow compatriots living in Lagos, Abuja, PH, Kano and every other place.