THE CINDERELA STORY OF TIGER WOODS; HIS FALL FROM GRACE, HEIGHT OF HUMILIATION, FRUSTRATIONS AND THE ANGLE THAT COMPLETES THE CIRCLE.


“Ahh, it fits,” Woods said, beaming as he tugged on that famous green jacket for the first time since 2005.
We all, I know would wish time’s like a spin you can just spin and awaits the result instantly. For Tiger, I’m sure this would’ve been his wish then, but now?
Maryama Jabani (Staff Writer) 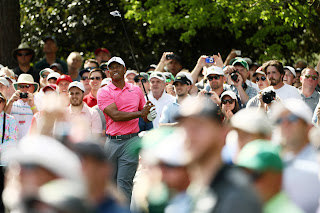 Life they say is a “Bitch”, at times, a very mean one for that matter to some people. Tiger Woods, American and world Golf champion isn’t a stranger to the ups and down of life and all the mortars it is capable of throwing at one. Once the toast, darling and icon of everyone, the signature to top brands, associates of world leaders and Presidents of conglomerates, then suddenly, like a wind in the storm, everything came spiralding and tumbling downturn, till they came to where the centre could no longer held, his marriage, his reputation, all came crashing to the lowest a man can fall from grace to grass.

He had major reconstructive surgery on his left knee shortly after limping out to what was then his most recent major championship, a playoff victory in the 2008 U.S. It turned out it was only a minor prelude to all the agony that was to come to Tiger Woods, so much of it self-inflicted.
It was reported that while everyone was celebrating the Thanksgiving holiday in 2009, Woods crashed his SUV into a tree and a fire hydrant outside his Florida home. It then suddenly followed with reports of a myriad of extramarital affairs, wrecking the facade he and his father had constructed of the dedicated athlete and perfect family man. Overnight, one of the world’s most famous people became a punchline and a talk topic, which were not for good. He became an eyesore, a plague everyone loves to avoid. 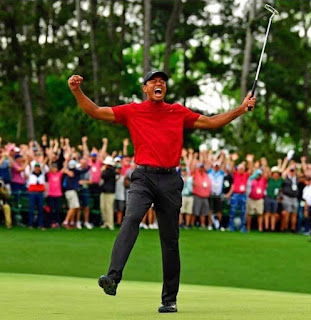 Woods checked into a Mississippi clinic for more than a month, apparently to deal with some of the sex addiction he was battling with. Most of his major sponsors fled for cover, Elin Nordegren, his wife divorced him and he was all alone. And as if that was not enough, in trying to make a return to golf, the game that made him fortune and famous at the Masters in 2005, he received a tongue lashing, with mean and derogatory words from the Augusta National Chairman, Bill Payne for his lack of moral scruples and for the poor example he set for America’s youth. If Woods thought things couldn’t get any worse back in 2010, he was mistaken, as his body continued to betray him, leading to one surgery after another in an attempt to alleviate the unyielding pain. His back was such a mess that it became a struggle just to walk, or sleep, or play with his kids. Woods faced the very real possibility of never playing golf again, not even for fun. In frustration he once asked in annoyance, in 2015, a few weeks before Christmas
“So where is the light at the end of the tunnel?”
“Who could have known?” At that point, Woods conceded, any further achievements on the golf course would be mere “gravy.”
The fourth surgery on his back was something of a last resort. Sure, he wanted to play golf again at the highest level, but he probably would have settled for a lifting of the pain and the ability to lead somewhat of a normal life.
About six weeks later, he sank into another abyss when police found him asleep — or passed out — behind the wheel of his running car in the middle of the night. He was arrested and briefly jailed. His mugshot showed the face of a man whose life had seemingly spiralled out of control.
Woods blamed it on a bad combination of pain medication, pleaded guilty to reckless driving and entered a diversion program.
While he worked — again — to restore some order to his personal life, Woods began to realize that the fusion on his back had resulted in something of a medical miracle. His swing got stronger and stronger, more and more like the Tiger of old. He kept dreading a return of the excruciating, piercing pain, but it stayed away
Physically and mentally fit, he contended at the last two majors of 2018, claimed a spot on the U.S. Ryder Cup team and won the season-ending Tour Championship at East Lake — his first victory of any kind in more than five years, setting off a wild, course-storming celebration from the gallery.
“That confirmed I could still win out here against the best players,” Woods said. “That gave me a lot of confidence going into this year. I wanted to keep building on it. I wanted to get my mind and body peaking for Augusta.”
Once again, a plan came together. And the tongue-lashing from Augusta National Chairman, Billy Payne some years ago that his lack of moral scruples is a very poor example for America’s youth is a far cry, to be sure, from the greeting Tiger Woods got Sunday in the interview room from green-jacketed moderator Craig Heatley, “Welcome back, Tiger. Or more appropriately, welcome home.”