"Pray for me, my Girl Friend Got Me into this Mess”, Man Who Killed Two Children on Allegation of Witch Craft sent in Prayer Request.

Trouble of any kind or any irrational undertakings are only known when and where they are started, but nobody knowns where and what they could snowballs to. If people could have a grasped of where any kind of trouble could lead to, they would always learned to avoid them. 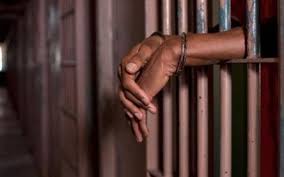 Uyime, the Atan Ikot Abia Idem, Ikot Ekpene man that tricked his two children to Akankpa, Cross River state two years ago, only to poisoned them to death on suspicions that they are witches, has succeeded in smuggling out a letter from the prison cell, pleading that his community people and the church should pray for him, even as he laid the blame solely on his girl friend. It should be remembered that a man that goes by the name Uyime, who was in his late twenties as of the time of the crime, two years ago, from Ikot Ekpene, Akwa Ibom was in the news, when the men of the Nigerian police force, Akamkpa division, from Cross River state stormed Atan Ikot Abia Idem, a community in the oldest local government area in Nigeria, Ikot Ekpene, Akwa Ibom state to arrest him, after he dumped his two children in a “supposed” unknown place, after poisoning and living them to die.

Though the children did not die without granting the statement that gave the men of the Nigerian police the lead that led to the arrest of their murderer, who incidentally turned to be their father, who is currently serving life term in a prison in Cross River state, it has also been confirmed that, the man did what he did, as a result of the constant instigation of the woman he was seeing as a girl friend, after separating with the dead children’s mother, as she informed him that his children were witches, and the reason behind his constant meeting with failure, as well as not allowing her to get pregnant and bear him a child. Corroborating this and revealing the contents of the smuggled letter from the castrated walls of the prison to your NaijaFriendly Platform, FriendsOfNaija, one of Uyime’s friend, who pleaded anonymity, towed the line of the letter, admitting that they all had seen the hand writing on the wall, but never thought it would lead to the loss of lives of the two young girls and putting their friend away as a murderer.  The friend stated how, from the start when their now convicted friend started bringing this said lady home, as the lady would put up all manners of attitudes and actions that was challenging the man’s authority, to the extent of beating and parading the man naked in his own house before his tenants once, as well as causing him bodily injuries on several occasions.