Death comes to all without announcement, but when it comes painfully as this one, man is left to ponder on the essence of his existence on earth. 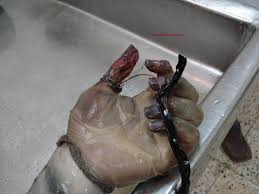 The Ancient city of Ikot Ekpene, Akwa Ibom state was, yesterday, Tuesday, thrown into pandemonium, as a welder, who left his house in the early hour of the day to work, was electrocuted to death without remedy, just less than an hour of reporting to his work place at Ibo Hall by Alderton, Ikot Ekpene. The Welder, whose name remained unknown as of the time of filing this report was presumed to be carrying out his work by all who saw him, as he was seen in a posed with the iron he was working on, unknown to his colleagues, which includes one of his sons, that he was all along trapped by the strong arms of electricity, until he was completely drained off his blood before the electricity released him to crashed to the chagrin of all.

The electrocuted man was then carried back to his house, as family members and friends felt that it would be needless taking him to the hospital, as it would amount to just needless waste of money, since he was already death. When your Naija Friendly platform visited the scene, people were seen lamenting, as all attested to the fact that the now death man was a hard working and peace loving fellow, whom the cruel hand of death took away without notice. The man, who was said to leave behind a wife with over five children, was then embalmed in his own house, as family members were seen mourning his untimely and painful exit.
#MayHisSoulRestInPeace.