An Immoral Justice is not justice at all. A conversation with a (rtd) Nigerian Navy Officer.

We are all victims of government’s failures and how lowly our lives have been degraded by them and her operators in this country, and as such we look for whom to hold liable at all time for our woes, and because Alhaji Atiku Abubakar was once the no2 man in government and a former civil servant, having served with the Nigerian Custom, HILIKA, there goes our culprit!

At wherever and whenever you want to take to looking at our country’s problem, as regard corruption, you can never be said to be wrong at whatever conclusion you arrived at. This is because you would sound right, factual, and appealing to what is of interest and of burden to most people, and as a result, you would be able to effortlessly identify your culprits, and the majority of the people would agree with you. But when you take a critical second thought of looking at them in the content of the law, gaging them morally on the scale of moral uprightness, that is where you would realized that Alhaji Atiku Abubakar is justifiably ahead of them and would continue to win with sound reasoning, beating down emotional blackmail and sentiments. Alhaji Atiku Abubakar is more righteous than most of them accusing him of corruption.

True we are all victims of government’s failures and how lowly our lives have been degraded by them and her operators in this country, and as such we look for whom to hold liable at all time for our woes, and because Alhaji Atiku Abubakar was once the no2 man in government and a former civil servant, serving with the custom, HILIKA, there goes our culprit. Another one somewhere, just because a male student of ABTI American University, chopping his father’s stolen money, wooed his girlfriend, fiancée or daughter, who is struggling to school in Modibo Adama Federal University of technology, Adamawa State, which you the boy friend or the father couldn't oblige, TAR! Atiku is the culprit.You are stingily holding unto a market bargain in Nigeria, a commodity you would have gladly paid for from your stolen money if it were to be abroad, but because na naija wey you love to dey cheat people.. AHA, I no “talkam!”, Atiku Abubakar’s corruption causes inflation, he is ostentatious and flamboyant, Atiku destroys our Public schools so that his ABTI American University would thrive. Are you for real? 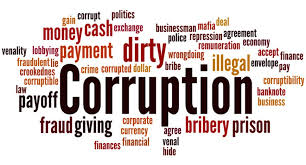 If Atiku’s Ntel had paid the tax they had been withholding, Nigeria wouldn’t have gone on recession,
Atiku is corrupt.

Who isn't as long as you are a Nigerian?
Atiku has already agreed to sell NNPC because he is corrupt, and all the hug-wash gibberishes they spanned out from their evil machinations. And ironically to our shame and pity, we swallowed them and foolishly helped take them further to the village square and labeled ourselves social media influencers and media personalities. Oh how pitiably low we have been conditioned to reason, our educations and analytical ability failing us!
Take Atiku away from the equation and Nigeria would still remain where she is, if not worst, as those people working and earning a living under Atiku Abubakar’s holdings wouldn't have been engaged, they would've become additional burden to the system, adding more pressure to the economy.
Atiku, like Alhaji Aliko Dangote and many other smart Nigerians and foreign interest simply saw an opportunity to invest and share part of the market with these foreign schools our fellow corrupt Nigerians send their children to go and school. Even with ABTI American University, are Nigerians still not taking their wards overseas to study, including Mr. President? Go and make your findings, we have many African’s countries and others, whose economies are single handedly being kept afloat by the investments of many, a puritanical, holier than thou, fighting corruption Leaders of this country. Atiku should rather be commended for choosing to capitalized on a consistently failed government to invest his own share of the stolen money in the system, against some of these your heroes, who rather would prefer to take theirs abroad, and you are here running your mouth on how Atiku is corrupt.
Is Atiku the problem? The answer is NO in capital letter, the problem of the country started since when the military came into government, and collapsed the regional government we used to have into this corrupt federating and states system, sectionalism, tribalism, favoritism and all sort of rubbishes came in, civil servants started finding avenues to steal money and undermining the system and laws establishing them, the leaders steals his own, looks the other way round and shields the culprit because he or she is his friend, friend of his friend, member of his religion, region or whatever affinity, and if you are not any of those, or used to be but fallen out with them, they shamelessly serves the public with your own failing. These are the fundamental cause of our problem, Alhaji Atiku Abubakar is not, Atiku should rather be appreciated and commended for investing his own loots here. If the law is to be observed and applied strictly in this our country, WHO BI THAT NIGERIAN, WHATSOEVER HE OR SHE IS , most especially those in public and established private sectors that is not corrupt? So people should be mindful of what they alleges, if not they would sound stupid to the reasonable people in the society, and if they continue, they might even run into libel crises and it would be then that they would alleged again how a certain public figure is not media friendly.

Who hasn't stolen money or is not corrupt in Nigeria, most especially politicians, including those in judiciary and law enforcement? What we should be asking either should be where is their own stolen money, what are they doing with them that are benefiting Nigerians, the owners of the money? At least Atiku’s own we don see’am, where their own dey??