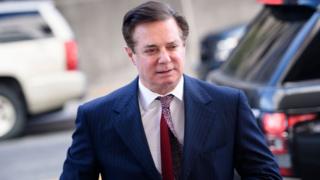 Paul Manafort, former campaign manager to the President of the United State of America, Mr. Donald Trump would be serving jailed term of 47 months for failing to disclosed millions of dollars earned from his political consulting job in Ukraine.

Though none of Manafort’s offenses, which he has been sentenced bothers on the allegations that relates to Russia’s meddling and collusion in the 2016 Presidential election of the United States of America, which Mr. Trump, the sitting President has always denied any wrong doing and described as witch-hunting, but Manafort as a matter of fact is also being suspected to have something to do with the allegation, being the campaign manager to Mr. Donald Trump as of then.

And despite Manaford's confession that he has been devastated and traumatized by the case in his address to the court, which the judge adjudged he is not being remorseful for his offense, the President's former campaign manager’s sentence has been described as mild by many, considering the recommendations of the US Department of Justice’s Special Counsel, Mr. Rebert Mueller, who has just rounded up his 22 months of investigation into the allegations that have come to overshadowed the Trump’s regime.


Manafort, 69, is also due for another sentence in another case, next week, due to illegal lobbying. And to say that Trump’s buddy’s wall is fast collapsing around him, is to said but the leas, despite ex-CIA Director John Brennan describing the non-disclosure case’s sentence as extra-ordinary lenient sentence.
at March 08, 2019