Quest For Peace in tomorrow’s Gubernatorial and State House of Assembly Election, Traditional Rulers in Akwa Ibom State Invokes Traditional Injunctions and Curse on Any One Who Would Breached Peace.


Desperate Situation they say equally requires desperate measures, as leaders have started resorting to the traditional and unscientific ways, our ancestors used to solve their social ills in their time, to solve today’s problem. 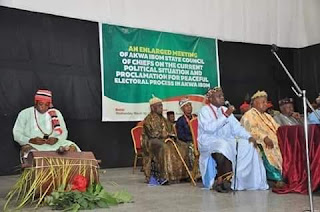 The level of tension and echoes of war resonating from Akwa Ibom state as a result of the March 9th Gubernatorial and State House of Assembly election has necessitated the convening of the extra ordinary meeting of the oil-rich State’s Council of Chiefs, held at the Ibom Hall, IBB Aevue, Uyo, the state capital on March5th, where the royal fathers issued a traditional injunction and curse on anyone or group of persons who would violate the peace and stability of the state.

After exhaustive deliberations on the current political situations in the oil-rich State and the need for peaceful electoral process before, during and after, the Royal Fathers resolved as follows;

1. The meeting having reviewed the historical perspective of Akwa Ibom State and the need for justice, fairness, oneness, unity, and equity, affirmed the rotational principle in the political governance of Akwa Ibom State.
2. Accordingly, the Council affirmed that since Akwa Ibom North East and Akwa Ibom North West Senatorial Districts had taken their turns respectively to produce Governors of Akwa Ibom State from 1999-2007 and 2007 – 2015, with each of the occupants having eight (8) years of two tenures each, same principle should apply to the current incumbent who is from Akwa Ibom South Senatorial District.
3. In this wise, the conclave affirmed total support for Mr. Udom Gabriel Emmanuel the current Governor to serve for two terms of eight (8) years and after which political power will shift to Akwa Ibom North East senatorial district in 2023 in line with the unity accord in Akwa Ibom State.
4. The Council emphasized that justice and fairness remains cardinal ingredients for unity and development to prevail and as such politics or personal ambition should not be taken to the extreme or allowed to distort the well-established unity accord in Akwa Ibom State.
5. The council call on the Akwa Ibom State electorate to go out en-mass to participate in the Gubernatorial and State House of Assembly Elections on Saturday, March 09, 2019
6. The Meeting urged the Independent Electoral Commission (INEC), to ensure free, fair, credible, transparent and acceptable elections. It also advised the Police, Army and other security agencies to ensure impartiality in their security support and coverage of the elections.
7. The Council admonished all Akwa Ibom people to maintain peace and order and directed all traditional rulers to take the message of peace as proclaimed by the conclave to their clans, villages, hamlets and domains.

For and on behalf of the enlarged meeting of Akwa Ibom State Council of Chiefs: 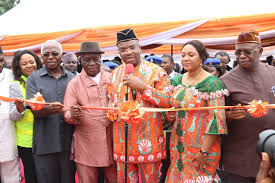