The Group Chief Executive Officer of MTN Nigeria, Mr. Rob Shuter has faulted the demand of $2b tax arrears demanded by the Nigerian government, through the office of the Attorney general of the federation, AGF Abubakar Malami. 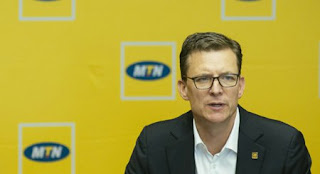 The position of the federal government of Nigeria on South African telecommunications giant, MTN in regard to $2b tax arrears being systematically evaded by MTN for over ten years in the country is being faulted by the company's CEO, Mr. Rob Shuter. In fact, Mr Shuter and his MTN described the AGF and the country of "Playing game".

Speaking yesterday in a conference call with the Executives and shareholders as he presented the annual results, Mr. Shuter laments how his company couldn't had paid the said tax arrears but be allowed to be carrying out business!

AGF Abubakar Malami had last year, September written to the telecommunication giants to intimate them of the arrears that includes import duties, VAT, and withholding taxes on foreign duties/payment, which MTN rejected, claiming that it had settled all her levies without owing any.

The South African telecommunication company operating in Nigeria had sued the government, and insisted that the AGF has no right, whatsoever under the constitution to be demanding for tax on behalf of the federal government, describing the situation as odd. MTN, who pointed out that it is a responsible corporate organisation that carried our her operations in line with relevant authority, read from the transcript of the conference call as thus;

"I think if you look at the history of our complicated tax disputes, they can take years, as you end up going to this tribunal and that tribunal etc,
“Now, of course what’s odd about the Nigeria situation is it’s not the Commissioner for Inland Revenue that we have the dispute with. It’s the attorney-general, who is really not mandated to collect tax.
“So, the legal process is basically saying you’re playing a game that you’re not meant to be playing. And when we talk to the tax authorities they have no particular quarrel with where we are with our various assessments.
“So, either we get the thing chucked out early on and the issue is finished, or it is just one of these lingering things that rolls around in the system for a while. And personally I don’t know which way it’s going to play out.

“I’m just absolutely adamant that we’re a responsible company, we have paid the taxes we had to pay, and the tax authorities themselves aren’t saying that we owe them anything. So I think we’ve just got to stare this one down.” the CEO reported.