APC to Claim Back her Stolen Votes In Akwa Ibom State……. Buhari

“What happened on February 23, where the votes of the people were stolen was a day light robbery and we are not deterred”, the President pointed out.

By Mariama Ijabani (Staff Writer)
President Mohammadu Buhari yesterday in Uyo, at a town hall meeting in the Akwa Ibom State capital yesterday, vowed to claimed back the stolen votes of his party, the All Progressive Congress (APC) in Akwa Ibom state in the recently concluded Presidential and National Assembly election, where all his party’s candidates, including the man of the people, former Senate minority Leader and former Governor, Senator Godswil Obot Akpabio lost mysteriously to the rival party, the People Democratic Party (PDP).

The President, who was represented by the Vice President, Prof. Yemi Osinbajo, was speaking in a town hall meeting, where he came to thank the people of the state for voting for the APC in the 23rd, February Presidential and National election, observed that it is impossible for all the APC candidates, including a very popular and well loved candidate in the person of the former Governor, Senator Godswil Obot Akpabio to lost the election the manner the Independent National Electoral Commission (INEC) wants us to believe they lost. The President alleged that INEC robbed his party of victory in the state, promising they are going to reclaim their victory. 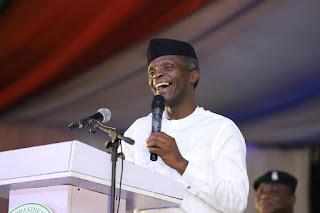 “What happened on February 23, where the votes of the people were stolen was a day light robbery and we are not deterred”, the President pointed out.
“The President sent me to thank you today. We are going to make sure that everything that was stolen on February 23 would be restored”, the VP promised the people.
“It is not possible that Sen. Godswil Akpio lost. We are in no doubt that Senator Akpabio is the elected Senator of Akwa Ibom, North West Senatorial District”, The VP pointed out.

The VP admonished the people to encouraged their neighbours and along, go out and cast their votes for the APC governorship candidate in the State, Obong Nsima and all the APC candidates in the State House of Assembly on Saturday, revealing that he and the party national chairman, Comrade Adam Oshiomole have been in the opposition for so long and cannot be defeated again. The VP also promised that the federal Government would engage the instrumentality of the Law to protect the mandate of the people.