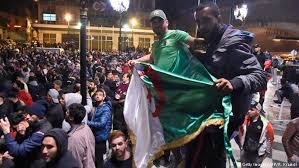 The sit-tight syndrome associated with African leaders is once again being re-enacted and witnessed yet again in Algeria, as the North African country’s President, President Bouteflika Abdelaziz insists on standing election again come April, to seek fifth term in office. Bouteflika 82, who become President since 1999 is said to be eyeing the country’s top job, yet again, despite being down with stroke in 2003 and rarely seen publicly.

According to report obtained from France 24, “striking train workers and students shut down the Algeria’s capital rail’s net-work and most of the country’s secondary schools in protest against Bouteflika’s fifth term bid”. The protest is not restricted to Algiers, the state capital alone, as reports of protest in places like the Constantine, the country’s third largest city, and even other poor cities like Ba bel Quid, and the suburb of Zeralda is not left out.

According to reports, several high school students are seen congregating in junctions, while others matched elsewhere across the cities. It was also learned from the Presidency that the latest protest was provoked by the report that Bouteflika returned into the country secretly from Swiss, after living the country two weeks ago for medical treatment in Swiss. President Bouteflika Andelaziz is conform and banished to the wheel chair, and is rarely seen in public, since after he went down with stroke in 2003. And since President Bouteflika announced his intention to seek re-election on February 10, the people have been protesting every Friday, after prayers, even as Agri-industries joining in the strike and protest have grounded and brought sugar and oil production to a halt.
at March 11, 2019