ASSURANCE, WHEN NSIMA EKERE KNEW HE WAS GOING TO BECOME THE GOVERNOR OF AKWA IBOM STATE.

“Is Saul also a prophet?”, the scripture recorded of passers-by, who saw him prophesying in the company of other Prophets in an errant of looking for his father’s missing Ass. You see some people turned Prophets without even knowing, until sensitive and watchful people saw come to past, the Prophesy, they made, most times casually or instinctively.


If anyone had said, just June, last year, that Obong Nsima Ekere, (ONE) , the All Progressive Congress, (APC) Governorship flag bearer in Akwa State would posed such fearful challenge to the already established and almighty People Democratic Party, (PDP)  as he is currently posing in the contest for who become the Helmsman of the State, nobody would have believed in his or her wildest imagination. Up until last year July16th, when the seemingly pitiful and none existent All Progressive Congress in the State held her first major rally in Ikot Ekpene township stadium in honour of Obong Nsima Ekere, the then Managing Director (MD) of the Niger Delta Development Commission (NDDC), after the December 2017 bloody (31/31) defeat at the Local Council pole by the then only dominating party in the state, PDP, everyone had thought it is going to be business as usual, a one Horse race banker. 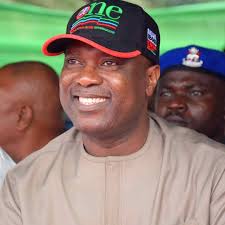 At the event in Ikot Ekpene,the then NDDC Boss, when it was time for him to be presented to the first teaming crowd of the APC, he had consciously and deliberately insisted on Davido’s hit single, “Assurance”. I remember standing at the front row below the podium, as the man, many now predict stands a fair chance of emerging winner at the coming March 9th governorship pole, refused to dance to any of the music the DJ felt was appropriate for the occasion, instead making a face and giving them the music he preferred, “Assurance”, he announced, requesting. Obong Nsima Ekere (ONE) was prophetically exercising his faith by insisting on that song, assuring his weary followers of the Assurance he had that he would not only emerged the standard flag bearer of the APC, but was equally assured of victory in the pole. And today with the surmounting of every huddles the challenge had presented, which includes appeasing Senator John Udo Edehe, whom many thought was going to shake the table to accommodating and aligning with the former Governor, Senator Godswil Obot Akpabio and every other implosions the party experienced, which many thought the party was not going be able to managed them, they have emerged even stronger and now ever so ASSURED of VOCTORY more than ever.