WHY UDOM IS NOT JUST THAT MAN RANDOM MUSING. 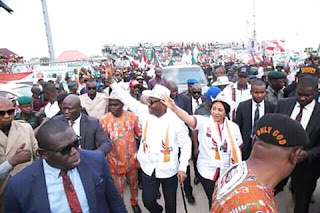 Forget about the hullaballoo and razzmatazz about the usage of God’s name to bamboozled the gullible public and all the other subtle sentiments being whipped up by the PDP cum those benefitting from this government, take my word for it, Udom is not just that man to deliver the developmental ideals of Akwa Ibom state, Udom does not love nor care about the development of Akwa Ibom, he only cares about his ego and his resume as a two term governor of Akwa Ibom State, and he is surrounded by such people too.
Haven’t we seen and experienced Udom’s antecedents in the last almost four years as the helmsman of the state? The arrogance, the lies, the incompetence, the lack of will power and initiative to create opportunities that would ameliorate the lot of Akwa Ibom people, even civil servants are languishing in silent for fear of victimization, our schools are in deplorable state, community schools that used to managed and fair well through the funding of their respective communities are now in a state of despair as a result of lack of subvention, teachers not paid salaries since the ego massaging celebrated take over almost two years ago and a complete stifling of the fresh air the state was handed over to him almost four years ago.

What are we talking about? Nsima has never been a Governor and as such we cannot say anything about whether he cannot do it, but having seen that of Udom and what he can, it is glaringly clear that this man does not just have what it takes nor possessed the will to be that man to champion our developmental course. Udom is not just it. Our presumed “Mr. Nice guy” as he is being touted to have brought security, Mr. good manager of resources with two addresses and flying chartered flight and what have you only points to one thing, Udom does not care about the welfare of Akwa Ibomites, neither does his party the PDP. Udom prides himself as a high flier and aristocrat, and he only cares for the elites, those he feels suits his “pimpers” paradise. To Governor Udom and his party, the PDP, the resources of the state is to maintain him and his bourgeois friends, (if you know what I mean!) that is for Udom Emmanuel as we could deduced from his antecedents, actions, utterances and body languages in the last almost four years. And for a man that is seeking for your vote for a second term!  MY BROTHER WOTOF IF THE MAN HAS NO AMBITION LEFT? Na him bi say we go carry our yansh smell pepper!

All we have experienced with Governor Udom in the last four years has been the cultivation and sustenance of the PDP culture that disenfranchised the masses and caters only for the few individuals in the corridor of power and the initiation of projects that only massaged their egos, nothing more, and nothing else. That’s the PDP structure and Udom is simply operating it. We are only lucky to have had adventurous people like the former Governor, Senator Godswil Akpabio who operated out of the structure and developed the state and her people, an act he is yet to be forgiven by those status quo people. And that pattern I am sure Obong Nsima Ekere of the APC is going to operate if given the opportunity, as he himself in one of his interviews with an onlinetv, Cahtv, once stated that he has been part of the government that works. But for Udom, it is not a right that he must do a second term because he was given a first term.