EXPOSED; AKPABIO IS NOT HUMAN!


The awe of the magnificient edifice suggest that whoever was the brain behind it initiation and construction consulted with wisdom and took a peep into vision, the mammoth crowd of spectators and visitors from across the country suggest the fulfillment of the vision. Legends were first mortal, Akpabio is a Legend. 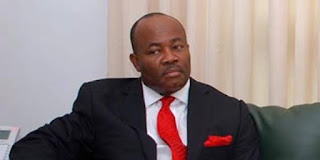 What can we say, or where are we to start from when the history of city development and legends that pioneered them is being told, more so in our own time and in our own clime? Are we to feigned ignorant or "form" witches and wizards in joining those that won’t recognized and acknowledged good things and people among us simply because of mundane sentimental affiliations?

Akwa Ibom state before now was just one of those lesser states that forms the common wealth of the country until one man with wisdom and the vision of how he would want others elsewhere perceived and treat where he comes from came on board to transformed and took us from the status of a lesser state to one of the states of the federation that is being recon with and given her place of honour in the leagues of states and people that forms the country. Senator (Dr)Godswil Obot Akpabio I dough my hat for you no matter what anyone say! Your vision and drive have proven you to be beyond mortals. In fact, with what you have done for Akwa Ibom state, you have attained immortality while you live. Once again I salute you HE, Sdnator Godswil Obot Akpabio, may your enemies surrender and bow to you at your gate!

Like the Queen of Sheba in the scripture that came to verified the tales of splendor and allure of King Solomon, seeing the awe and the magnificient Godswill Akpabio International stadium, also known as the nest of champions and other edifices conceived, initiated and build by former Governor of Akwa Ibom state, now Senator representing the State’s North-West Senatorial district at the National Assembly, Senator Godswil Obot Akpabio, one can only conclude that the man consulted with wisdom and was guided by vision. The mammoth crowd of spectators and visitors from across the country and others across the globe visiting the state suggest the fulfillment of the vision.
Ok, I heard some people saying that “After all it is not his money, it was the state’s money he used in achieving all that he achieved”, I hear and I agree, but what about others that had been there before him and didn’t had the vision and pained with the derogatory status that we were known with to have done anything to propelled us a little above the ground level as he, Akpabio has done for us and still doing? Oga leave matter for Matthias, Akpabio is a Legend and immortal simple!
Imagine President Mohammadu Buhari (PMB) and his All Progressive Congress (APC) deciding on our own little Akwa Ibom of all the states of the federation to flag off the South-South and the party’s general presidential campaign! You think that is a mean feet? Seeing international figures like Pastor Tonye Cole, the governorship flag bearer of River state, APC national Leader, Senator Bola Ahmed Tinubu, the dancing Oshiomole, Boss Mustapher, Lai Mohammed, Governor El-Rufai, Kashim Shetima, Ngige and all the APC governors, Federal Ministers, Senators, House of Rep members  and all of those whom, if not for the developmental strides and vision of one man to change the rhetoric of our state wouldn’t have in their entire life time crossed this part of the world is a testament to the immortality status this man, Akpabio have attained. Don’t forget, it is not quite long ago when he made the famous switched from his former People’s Democratic Party (PDP) to APC, and in less time, he first attracted mammoth numbers of who is who in the country’s political space to Ikot Ekpene. His vision alone has seen the state become a destination, unlike when we only used to serve as a route to either Calabar or other neighboring states. Let everyone that loves good things and expects good things in their lives appreciate Senator Godswil Obot Akpabio as the undisputable developmental Legend and a true revolutionary leader of our time.
ALL HAIL AKPABIO.
at January 15, 2019