Tolerance and patience they say are two foundational elements that enhances democracy, and above all, tolerance has now risen to become the only true test of our civilisation. 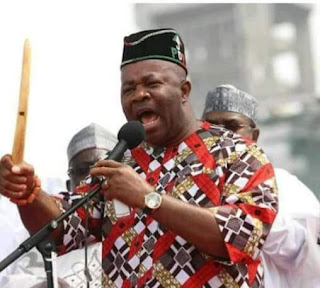 Governor Udom Emanuel of Akwa Ibom seam to be the first to draw blood in a relationship that was already heading warsaw, an idiomatic statement that turns and make Warsaw now the aggressor, by being the first to pulled the trigger,  thereby,  attracting war to  her (Warsaw) from the almighty federal might.

How dare Governor Udom to so provoked the Lion and the General by denying them the used of a public facility just because of one irrelevant coronation of a king that is not recognised by the constitution of the country!. See how tenant dey turn come give landlord quit noticed!

Iyammi, what kind of weed is Udom smoking or who are his advisers? Now the clear sense of the sermon of the Obot Akara pastor, who stated that the ways of knowing a leader that God has abandoned is by the magnitude and frequency of mistakes he would be making. The counsel of Ahytophel, i may say!

Though the government through her ministry of information have released a press released, sighting reasons why obliging the used of the public facility to the opposition to host the President of the federal republic would not be possible! The skewd reason of Julius Begger not being around and the commencement of the Nigeria Premier league is nothing but smoke screen.
at December 23, 2018