Life most persistent question they Say is, “what are you doing for others? If you can’t feed a hundred people, feed just one and overcoming poverty they say is not a task of charity, but an act of justice. 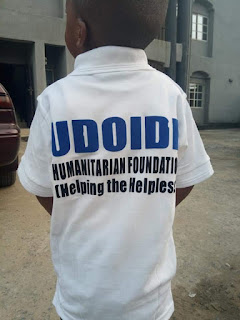 The argument on the purpose of our existence here on earth as humans in regard to the above questions is the driving objective that propelled Elder Lawrence Udoide, the Special Adviser to Governor Udom Emmanuel on inter-party affairs to returned back to his community, Usuk Ukwok, a community in Ini LGA of Akwa Ibom state that have had their own fair share of the successive governments’ neglect until now to give back to the down trodden in the spirit the season of love and sharing, through his newly established Udoide Humanitarian Foundation (UHF).Speaking as he launched and commissioned the UHF,  an initiative of the Special Adviser to the Governor of Akwa Ibom state on inter party affairs, Mr. Lawrence Udoide, the Hon Commissioner for  Economic Development and man power planning, Rt Hon Ekong Samson, eulogized the SA and encouraged others to emulate him as a means of extending Government’s and the goods of the land to the masses. The Hon Commissioner also challenged the people to reciprocate the good gesture of Governor Udom Emmanuel to them by voting and returning the Governor for a second term, as well as voting for the PDP. 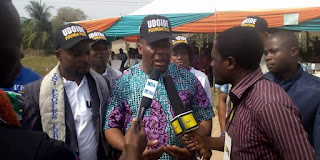 Also speaking to the press at the event of the launching and empowerment programme of the UHF at Usok Ukwok, Ini LGA, Akwa Ibom state, the SA on inter-party affairs, Mr. Udoide revealed that he was humbled and motivated by God’s benevolent on him, as well as seeking for a way to do something different that could actually touched the people positively no matter how little, having been in the position of being without before. Mr. Udoide revealed that he seeks to use the Udoide Humanitarian Foundation (UHF) to make life meaningful to the needy in the society.

The foundation which has already facilitated and paid for several indigenes of the community to commence various vocational training in the areas of Auto- mechanics, welding, fashion designing, soap, pastry and other commodities making, as well as their one year accommodation, also saw to the distribution of wrappers and food items to widows, including the appreciation of some members of the community who are involved in one undertakings or the other to improve on the community with cash, not forgetting party faithful across the ten wards of Ini LGA.

Present to graced the launched and empowerment programme of the UHF are digniteries like former Commissioner for Science and Technology, Hon. Samuel Efangan, the representative of Senator Basey Albert Akpan, Senator representing the Uyo Senatorial district and the representative of Obong Basey Inuaeyen, who all comments Udoide’s effort and admonished the people of Usuk Ukwok to vote for Governor Udom Emmanuel and the PDP, as a way of sustaining and increasing the inflow of good things which they are now enjoying, contrary to the denial and deprivation they used to have in the past.
at December 22, 2018