Do unto others as you would want them do unto you is the eternal law that is being invoked in Akwa Ibom state to question  Governor Udom Emmanuel's dealings with the people of Akwa Ibom state. 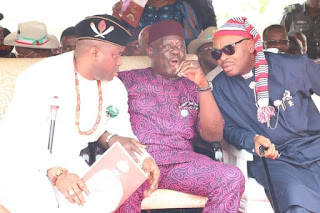 The greatest man inhumanity to man is to deliberately deny his fellow man his daily bread. Little wonder the scripture postulated in Lamentation3:36 that “To deny a man in his course, the Lord does not approve”
It is precisely a year and seven months now since Governor Udom Gabriel Emmanuel, a Deacon that professes God at the slightest opportunity announced to the elation of all, the taking over of seven community secondary schools across the three senatorial districts of the state. A year and seven months after, the joy and expectations of the respective teachers, students and guardians of those children in these respective schools have been disappointed, even as teachers languished in hunger as a result of none absorption, talk less payment of salaries, students inadequately tutored as a result of lack of subvention to these schools, teachers not in their right state of minds psychologically, and guardians being at the receiving ends, as their wards now returned home from school poorly schooled. OH WHAT A GOVERNMENT! OH WHAT A GOVERNOR!

From Excellent Secondary school at Mpatenin, to the Community technical college Ikot Udoe in Ikot Ekpene, community comprehensive secondary school Ekeya in Okobo, Union secondary school Ibiaku, Ibono and community secondary school Uruan, and others, the story is one and same tale of woe, deprivation, neglect and degradation, that one is forced to asked if this governor and his government has a human face at all???

Before the deceitful announcement that was received with celebration and high hopes, the schools in their own little ways through internal arrangement used to promptly pay their teachers and managed their schools well, until that demonic announcement came to scramble their arrangements. PTA no longer pay their commitments that used to helped in managing the schools, as they now argue that the schools are now government’s schools, the schools no longer demand for and collect fees. While government is not forth-coming, the schools, teachers, students and guardians are left to themselves to nurse their disappointments. Even as Christmas beacon, the staffs of these respective schools with their families are hopelessly looking with hope that God would touched Pharaoh’s heart and let the children of Israel go! OH WHAT A GOVERNEMNT AND WHAT A GOVERNOR!

How long does it a take a responsible government, one that’s not a fraud to compute, document and start paying her staff? If Governor Udom was to be a teacher in one of those schools, would he have appreciated this kind of treatment his government has mated out to these brothers and sisters of ours? Can Governor Udom send his children to any of these schools under his management? OH WHAT A GOVERNOR, OH WHAT A GOVERNMENT!
Governor Udom have to demonstrate good will and match is words with action and commenced the payment of these innocent Akwa Ibomites their rightful entitlements, from the day he announced the takeover of those schools, anything short and any further delay would only further reinforced what the Akwa Ibom people thinks of this suspicious government, who only stay on defensive and assembled dogs to attack anyone who disagree with her.
at December 04, 2018