BOKO HARAM, HOW BADEH FAILED THE COUNTRY HE LOVED

Blaming others can be so satisfying, yet damning, as it could so stifled our development and hinder our progress. 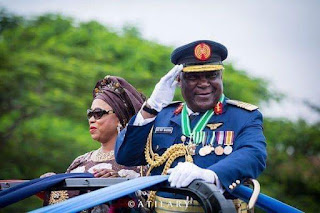 I’m not one of those who play politics with death, those who always spin out stuffs from issues in favour of their beliefs and in support of their political affiliations no matter how skewed it looks. I’m not one given to sentiments and blind support, most especially when death occurs as a result of collective leadership and national failure. No, I’m not going to blame Air Vice Marshal Alex Badeh for the failure of our military to crushed Boko Haram in his time as the head of the country’s security, but I’ll rather blame him for being the kind of patriot and an excellent professional that saw Boko Haram having a meeting with top politicians from the North in a military Bunker and refusing to give his boys order to exterminate them, but only took pictures as Femi Fani Kayode (FFK) former minister of Aviation stated according to DailyTime. No, I won’t blame him for anything, even as we all do as a people on our country’s woes. 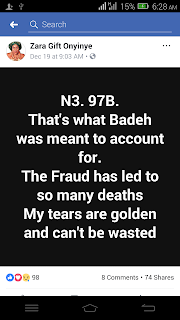 Since the unfortunate news of the brutal assassination and murder of the former Chief of Defense Staff, Air Vice Marshal Alex Badeh broke out some days ago; many have tried labeling it a good riddance to bad rubbish. One APC star spinner, one Zara Gift Onyinye had insinuated that Air Vice Marshal Alex Badeh deserved to die for refusing to buy needed arms and ammunitions for the Nigerian military to prosecute the war against insurgency in the country’s North-East, thus the reason she would rather spare her tears which is golden for the innocents that died during his time than shade them for him (Badeh).

Though this insinuations sounds like a devil’s philosophy to me, but it was a thought line that was considered a fair argument, bought, handsomely and robustly propagated by her fellow APC followers on the social media. This is what we do so well in this country; we always refused to look at the other side of the reasoning which is a very scarce commodity among Nigerian party men and women, a plague detrimental to our country as a whole. The very fact that Badeh was only unfortunate to be the next in line in term of rang to serve his country when he did just as it is PMB, Buratai and others that are serving in this “supposedly” saintly era where Buratai and his Army bought needed weapons, the entire Boko Haram completely annihilated and the war on terror won as a result saintly men and women that forms the APC membership.