Pray for the peace of Jerusalem, for in her peace lies yours'

May anyone who used the blood of virgins or undergo any form of ritual to passed election never succeed In Jesus Name”,
“AMEEN” 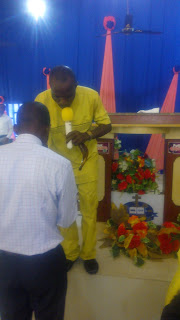 Those were the words and heartfelt prayers and declaration of Pastor David Umoh of the Bible Christian Crusaders’ Mission (BCCM), Ikot Ekpene branch on Sunday, as well as the thunderous “AMEN” response of the congregation, as the church climaxed her annual convention which commenced last Wednesday nationwide.

Pastor Umoh, who led the prayers to mark the end of the four days programme, led the people to pray for a successful and sweat less 2019, which by the Holy Spirit is the team of the church for 2019. The man of God also called on the congregation to pray against violence of any kind in the upcoming 2019 general election, pointing out that if there is any form of violence, the church would be affected too, and the prophecy for a sweat less 2019 would not be realizable. Prayers were also said for the continuous growth of the mission, for the general overseer to be guided and fill by the Holy Spirit so that to can continually lead the mission, as well as for any agent of the kingdom of darkness in the mission to be shown the way out.
Though the Pastor observed that God can do anything he wants in any circumstances, but he pointed out that peace is very paramount to the development of any society, as it would enable everyone go about their endeavors with peace of mind. The sermon was preached from the book of John14, with a called for Christians worldwide to be heavenly conscious.