N22,500 Ok For Family Of Four, Only Us Deserved To Live in Aflurnce", Ngige 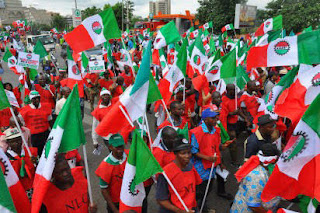 The Nigerian Minister of Labour and Productivity, Dr. Chris Nlgige has declared that the minimum wage of N22, 500, which translates to a meagre $61 or thereabout per month is sufficient for Nigerian family of four. Dr. Ngige made this revelation known on a Chanel television appearnce on Saturday, morning belt show, contented that even the #22, 000 has not been accepted yet by the government talk less talking of increasing it to anything more.

It should be remembered that the Nigerian Labour Congress has been logged in negotiation with the All Progress Congress, APC government over what they term as living wages in the face of highper inflation that has seen the economy of the country and the cost of living going west since the inception of this government. In an earlier negotiation, the Minister had categorically pointed out that Labour lacks the power to dictate to government how much they want.

With the dollar depreciating the Nigerian currency to #357 to a $1 and a consuming economy where government only pays lips service to improving and diversifying the economy and cutting down on the cost of government and living in affluence, it only become necessary that Labour demand for something comesurate and reasonable. Though the respective state governors who have been equally involved in the wage negotiation have settled for #30,000 per month as minimum wage, the Minister's position indicates contrary.
at November 04, 2018