The Ikot Ekpene Local Government Area (LGA) Paramount Ruler, His Royal Majesty (HRM) Akuku Okon Udo Ukut had thought he could just detailed his security operatives to stormed and arrest the youths and people of Ikot Aabia Idem Village, whom report prior this morning were supposed to be holding a community council meeting to rectify and sustained their loyalty and resolution on Surveyor David Esiene, the man the entire community, made up of six families have endorsed and agreed that he be their village head, against The Paramount’s interest, which is the son of late Paramount ruler, Late Akuku Insiak, Eng. Eshiet Asiak. 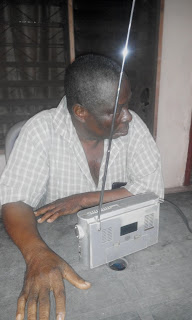 Now Ikot Abia Idem is an independent community that constitutes the urban part of the two clans of the local government, as against the Akuku’s Amayam clan that completes the lot. You would recall that sometimes ago, your NaijaFriendly and Ikot Ekpene Plaza News, your online reliable and timely news platform reported the royal rumble threatening the peace of the Nigeria’s oldest local government area, the intrigues, the allegations of N5M bribery and the dubious circumventing meddling of their paramount ruler, as against the will of the people.

Now as of this morning, your NAijaFRIENDLY AND Ikot Ekpene Plaza News home can reliably confirm that the security operatives of the paramount ruler, whose brief was to make arrest and disallowed the meeting from holding couldn’t effect any of their instructions, as Ikot Abia Idem Community, in anticipation of the idiosyncrasies of the Paramount ruler and his penchant to abuse power, had equally gone to the police station in the city to request for police presence in a lawfully assembled gathering to deliberate issues within their constitutional and traditional rights”, one of the youth, who craved anonymity reported.

The summary of the origin of this diet is the disagreement between a community, Ikot Abia Idem, Ikot Ekpene, Akwa Ibom, whom after the demised of the former LGA paramount ruler, Akuku Asiak, who fortunately was from same Ikot Abia idem, the community had commenced the traditional and lawful process of choosing a replacement and eventually settled for a certain Surveyor David Esiene, whom according to confirmed report from both parties involved in the disagreement, was taken to the paramount ruler, and necessary rites and requirements  met to the paramount ruler and the entire community involve, only awaiting the day the Traditional Rulers Council (TRC), where the paramount ruler, His Royal Majesty (HRM) would preside over other council of village heads for coronation and acceptance into the council of chief’s forum, but instead they awake one day to the new order and a new song by the paramount ruler- that announced a new entrant into the race, a son to the late Paramount ruler Akuku Aisak, Engineer Eshiet Asiak, a personality the community says they’ve never met.
at November 17, 2018