HOW GOD TOOK ME TO INVESTIGATE SALVATION FOR THE WORLD CHAPEL AND REVEREND ANIETIE INYANG.....ArchBishop John E. Kokobassey , Archbishop of the Okigwe diocese of Methodist Church Nigeria 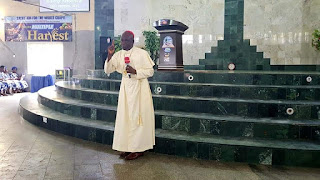 Archbishop John E. Kokobassey, the Archbiahop of Okigwe dioces of the Methodist Church Nigeria, recently in a Sunday service of  the 15th Anniversary Thanksgiving service of the Salvation for the World Chapel, aka the City of David, revealed to the mamoth worshipers who came to felicitate with the church and the servant of God, Rev. Anietie Inyang on the occasion, how God took him in the spirit to investigate the authenticity and veracity of the micale claims of the church. Archbishop Kokobassey, who was the guest minister of the day apologized to the congregation for taking this long to revealed his experience and findings, also cautioned the worshipers and the general public from bad mouthing what the don't have a lear understanding  about, but to intead asked question and seek for clarity. 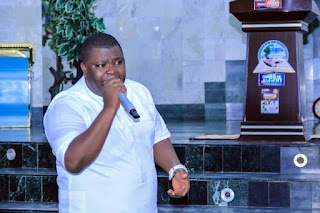 Narrating the incidence, the Archbishop told the crowd, how a short while after odaining and commissioning Rev  aInyang to go and carry out what everyone was convinced was evidence the task God had created him for, tales  of manipulations and false claims started flying round town. Archbishop Kokobassey revealed further that, the one that got at him the most and troubled his spirit was a call he got from a fellow who lampooned him and stated in clear term his disappointnent in him for associating himself with such fraud and the resoect he used to have for him. The Bishop pointed how that he was very troubled, untill God took him in the spirit on the journey to investigate the allegations, which he found out to be all lies, but true and authentic the micaculous works of God and testimonies of deliverance in tge lives of tge people.
Archbishop John Kokobassey stated that he has no cause to envy his son, but rather he is proud of his accomplishment , as every good parents should look forward and put capacity in place for their children to suppased them. "Any child that is not bigger and better than his or her parent is not a good child", the Archbishop added.
"My own assignment is not to built, but to raised those who would built and do mighty works", Archbishop Kokobassey concluded.