Call it royal rumble and you won’t be wrong, as the people of Ikot Abia Idem, a community in Ikot Ekpene Local government area, Akwa Ibom state set to slog it out with their Paramount Ruler, Okuku Okon Ukut for dubiously working behind the scene to installed the son of the late Paramount Ruler, Okuku G.J. Asiak, who passed on last year against the choice of the people.

Speaking to your Naija friendly platform, FriendsOfNaija and Ikot Ekpene Plaza news yesterday, the youth president of the community, Comrade Efrenfon Ikinwot, who led the youth and men of good will of the community to sensitized the people on the laid down rules and agreed process of nominating and installing a Chief in the community and also informed the people not to honour the summoned by Okon Ukut to turned up this morning at the Traditional Ruling Council (TRC) for the installment and official recognition exercise of Late Aisak’s son by the government, Mr. Mfon argued that since the Paramount erred in his judgment and chose to violate the law of the land, including an existing standing court order and government’s advised that everything pertaining the matter should be put on hold till after the general election next year and pending when the court would have determined the case, so the people shouldn’t honour the Paramount Ruler’s summon.
Also speaking to the press, the entire six family heads expressed their utter disappointment at the Paramount Ruler for towing this dishourable path and setting aside the agreed will of the people, who had already elected their Chief in the person of Engineer, Surveyor David Esiene, whom the community unanimously endorsed and even took to the Paramount Ruler for introduction, as well as paid the necessary consultation fees and complete items. They further warned the paramount Ruler to trade with caution, as the path he his heading is likely going to set the entire community ablaze, a thing they said they don’t want. 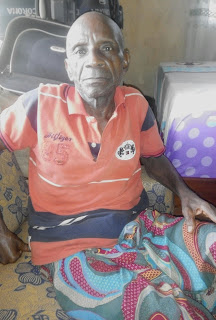 Obong Joseph Udo, the family head of Nto Esute pointed out that, there have never been a time in the history of the community when they went to the TRC to elect who would be the village head, rather it is always done at the village council hall, Awan Ukpong by the people before presenting the elected chief to the Traditional Ruling Council for official recognition and coronation.  Also corroborating Chief udo’s position, Obong Etim Akpan, another family head, called on the people of Ikot Udoe, where the Paramount ruler is from to call their son to order, accusing him of trying to ignite fire in Ikot Abia idem.  Another family head, Chief Sunday Ubo, who said he is ninety eight (98yrs) years old informed the gathering that he was the one appointed and coroneted the late Asiak, informing the press that the position of village head in Ikot Abia Idem has never been an hereditary one, but a rotational system, where the council of chiefs, made up of the respective family heads would in agreement, after observing the necessary rites would chose their own leader, pointing out that it has never an affair of outsiders, or some greedy people who go behind the will of these said people to adopt someone who paid them money.
The people of Ikot Abia Idem called on the Governor and the Commissioner of Local Government Affairs to as a matter of important act swiftly and decisively so as to avert the impending implosion that is about to occur.
at November 04, 2018