The Crash Course Obong Nsima Ekere, Must Take If He Must Become Governor.

Don’t forget that every politics is local, as well as “every publicity is publicity” and as such, you can’t ignore local media platforms and local journalists in preference to national or other elevated ones, as your target audience can only be found there with them.

If there is any lesson or course, and an urgent one for that matter that Obong Nsima Ekere, 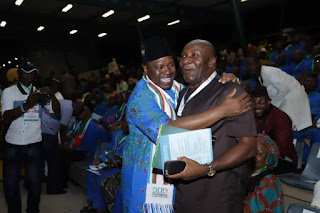 the Akwa Ibom state Governorship candidate of the All Progressive Congress, (APC) must take from the likes of former Governor and current Senator, representing Ikot Ekpene Senatorial district, Senator Godswil Akpabio, is that of identifying his particular public and the ascertainment of the appropriate media platform that would meet the “REACH” objective of his event or outing. As a matter of urgency, his media handlers should coached him and sternly watch out for appropriate local media platforms suitable for effective disseminate of his message and selling his candidacy within Akwa Ibom state, against insisting on the sophisticated and well established ones, which might not necessarily deliver on the objective in the first place.

Don’t get me wrong, I’m not against the well established Chanel tv, AIT, NTA or others media platforms, which the APC candidate insists must be available before he grants interview, as witnessed two days ago in the occasion of the Entrepreneur/Agriculture disbursement programme organized by the former Governor and Senate Minority leader, Senator Godswil Obot Akpabio in Ikot Ekpene, what I’m holding brief for is the “REACH” objective of that interview, which was meant to get to as many Akwa Ibom people as possible, who are also supposed to be his target audience in the upcoming 2019 general election. At the event, there were several journalists representing some local media outfits in the state, including local bloggers and a local onlinetv, cahtv, the APC governorship candidate after the interview of the Senator by the press, insisted on having NTA by asking first, “Where is NTA?” before granting the interview.

Don’t forget that every politics is local, as well as “every publicity is publicity” and as such, you can’t ignore local media platforms and local journalists in preference to national or other elevated ones, as your target audience can only be found there with them. When we talk about “MEDIA REACH” as part of media effectiveness, Akpabio knows how to get it, little wonder he is so popular among every sphere in the society and he is the master of the game. Akbio romance the press, both the local, national and international.  And he sure knows how to and tries to take care of them, except recently that we are beginning to observed patterns not known by the Senator with the press.
If for instance the people that you need to buy a particular product you sell are in a particular place, it would be counterproductive to take that product to another place entirely where the people that need your products cannot be found. The NDDC DG was insisting on seeing NTA before he grants interview, I wonder if he ever stopped to analyzed how many Akwa Ibomites, whom he wants to vote for him in the upcoming election would see the news? If he looks down on and ignores the local news platforms and journalists, he shouldn’t forget to appreciate the efforts and sacrifices those fellows put up just to carry out their service. Yes most of these journalists put in so much effort to get those contents because they needs them for their respective medium, their efforts should at least be appreciated, as EMPATHY is also the characteristic of good leaders. You prefer to park lot of money and pay the established media houses, which is good. But don’t forget the fact that the people you would need to vote for you are in your local communities and most times, depends on those local media platforms to get their information. WorkSmart
at October 24, 2018