It turns out to be a two in one event at Abiakpo Nkap, Obot Akara LGA of Akwa Ibom state yesterday, at the country home of the Late former Commissioner of Tourism and culture, Hon. Barrister Austin Udoh Mbeh , who passed on last year. The memorial event to commemorate the death of the Late former Commissioner and the investiture and coronation of his son, Prince Ekemini Mbeh, the heir apparent to the Late Barrister Mbeh’s legacy as the political leader of Nto-Edino ward4 by the All Progress Party, APC.

The investiture and the enthronement of Prince Ekemini Mbeh as the new political leader of NtoEdino ward4 witnessed the stalwarts of the party from across the 31 local government areas of the state as well as political and business associates of his late father, the entire Abiakpo Nkap Village and other neighboring villages came out in their numbers to be part of history as the young Prince ascend the political throne of ward4 which was vacated last year when his father passed on.

Addressing the crowd and delivering his acceptance speech, Prince Mbeh pointed out that even though his father is death but he refused to die. The new political leader of Nto-Edino ward4 thanked God and the people for giving him the opportunity to continue with the legacies of his father, reiterating that posterity would not forgive him if he allows the legacies of his father to just fade away like that. The Prince argued that leadership is not in age and in size but in what one is able to bring to the table. He assured the youth, women and everyone of the new dawn and great deal which he is coming to championed for the people of Obot Akara local government area, whom he observed has been marginalized and denied democracy dividend for too long. 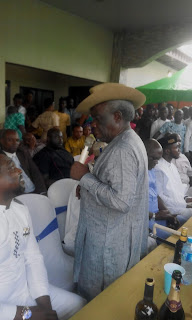 “Leadership should be about service to humanity”, Prince Ekemini stated, adding that his emergence as the leader would witnessed the redefinition of leadership, new dawn of hope and new beginning in the history of Obot Akara politics. The new political leader of Nto-Edino ward4 revealed to the people that his late father was a cat with nine lives who fought to established APC in Obot Akara, Ikot Ekpene and Esien Udim LGA respectively.
“Barrister Austin Udoh Mbeh only came to pave the way for the real Mbeh to manifest”, Prince Ekemini pointed out, observing that the leadership of the party in the ward has been vacant since his father died last year until the party called and bid him to assume the leadership of the party at the ward as his late father did. Prince Ekemini also revealed that he consulted with his family and God before stepping out to be counted after receiving the signal that the coast is clear.