Akwa Advancement Group Gets Government’s Notch To Operates as a Socio-Political Group in the State.

A new Socio-Political group was recently approved by the government of Akwa Ibom State
The New group seeks to work to advanced the interest of the Akwa Ibom person individually and corporately. 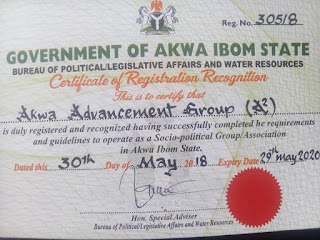 The Akwa Ibom State government recently through her Bureau for Political/ Legislative Affairs and Water Resources, approved and presented the certificate of recognition and approval to a new Socio-Political group,  Akwa Advancement Group. The new Socio-Political group seeks to operate in and outside the state as a socio-political organisation that coordinates and advanced the course and interest of the Akwa Ibom person, individually and collectively.

Presenting the certificate of registration and recognition to the National Coordinator of  Akwa Advancement Group, Chief Elijah Ifot, the Hon. Special Adviser to the Governor on Political / Legislative Affairs and Water Resources, Hon. Samson Ekong congratulated the new group and admonished them to operate under the ambit of the law and to strictly abide by the objectives of the group, working in unity and in line with the advancement objective of Governor Udom Emmanuel for Akwa ibom State. The Hon. Special Adviser also counseled the newly registered and approved group to throw their door wide open to all Akwa Ibomites without discrimination and to ensure their advancement programmes benefits all. 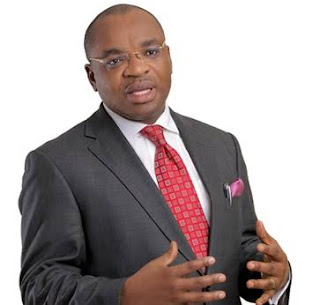 Brandishing the certificate of registration and approval before the Press and the public, Chief Ifot revealed the objectives of Akwa Advancement Group to include: creating a platform for political education, enlightenment and mobilization of members and the public, to serve as a medium for voters’ enlightenment from polling Units, Wards, Chapters, State and the entire federation. The National Coordinator also enumerated other objectives of the new Socio-Political group to includes, supporting and encouraging lawful programmes and all the developmental policies of government, as well as to promotes and maintained peace and order within the facets and template of the Constitution of the Federal Republic of Nigeria.

Akwa Advancement Group pledged to use her platform to advance the course and interest of the Akwa Ibom person both home and abroad, individually and corporately in any giving situation. The National Coordinator, Chief Elijah Ifot also announced the resolved of the newly registered and approved body to work, sensitized and mobilized all Akwa Ibomites to vote and returned Governor Udom Emmanuel for a second term come 2019, stating that the new association is impressed so far with the accomplishment, and the direction Governor Udom Emmanuel is leading Akwa Ibom State. ‘’Let me state here clearly, Sir, we in Akwa Advancement Group pledged our support to work assiduously to advanced the chances of our working Governor to be returned for a second term come 2019 without hassle’’, The National Coordinator pledged.