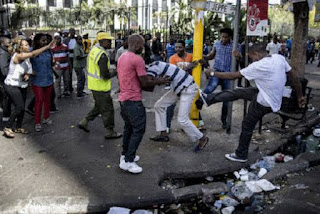 Worried by the renewed and unabated xenophobic attack targeted at Nigerians in South Africa, the Nigerian House of Representative on Wednesday, issued a summon to the Minister of Foreign Affairs and the Senior Special Assistant to the President on Diaspora matters to come and brief her on what is being done by the government.

The Nigerian House of Representatives on Wednesday, in a resolution, extended summons to the Minister of Foreign Affairs, Mr. Geoffrey Onyeama and President Muhammadu Buhari’s Senior Special Assistant on Diaspora Matters, Mr. Abike Dabiri-Erewa, over the renewed extrajudicial and xenophobic killings of Nigerians in South Africa.

The stand of the House was predicated on a motion that was moved by the Chairman, House Committee on Aviation, Mrs. Nkeiruka Onyejeocha, who observed that in May alone, two Nigerians were killed in South Africa, Francis Ochuba killed on May 5, the second victim, Chidi Ibebuike on May 13 respectively.

The House in a resolution passed to extend a summon to the designated government’s officials also recalled that in November 2017, another Nigerian was also killed with nothing being done by neither the South African government nor the Nigerian government.

Members took turn to expressed concerns and worries over the issue and concluded that it appears as if the Federal Government has not taken any strategic step toward addressing the problem and to safeguard the lives and properties of Nigerians living in South Africa by engaging its South African counterpart elaborately on the matter.

The House in an extensive motion stated thus:

“The House recalls the numerous incidents of the gruesome killings of Nigerians in the Republic of South Africa, most of which prompted reactions from the House, Nigerians, and the world at large at different times. Despite the reactions of the House to those previous killings, there has been no resolute move by the Federal Government to engage the Government of South Africa in a bid to stop the killings, which have continued with mindless impunity.The House is concerned that Nigerians remain endangered people in South Africa, with no succour in sight from either the Nigerian or South African Government.
On May 5, 2018, one Mr. Francis Ochuba, who hailed from the Umunneochi Local Government Area, Abia State, was gunned down in central Johannesburg while visiting his tenant along with his female South African estate agent to demand rent. Also on May 13, 2018, Mr. Chidi Ibebuike, who hailed from Uturu, Isuikwuato, Abia State, was shot dead and his car snatched at Mpumalanga, South Africa. One Sunday Ezeji, popularly known as ‘Alhaji’, was also shot dead on November 17, 2017, in front of his shop at Pretoria, South Africa. The House is worried by the seeming unabated impunity with which Nigerians are attacked and killed, sometimes within the view of South African law enforcement agents. The House believes that a lot more needs to be done by the Federal Government through deliberations with the South African Government to ensure the protection of Nigerians in South Africa and also that justice is done over previous incidents of Nigerians who were killed without provocation.”

The session, presided over by the Speaker, Mr. Yakubu Dogara, directed its Committees on Foreign Relations and the Diaspora to look into the fresh killings and report back to the House.

It would be remembered that in June last year; The House had engaged the South African Parliament on the killings in a bid to end the xenophobic attacks on Nigerians by using the legislature.