WHY AKPABIO IS BETTER THAN THEM ALL

Most of you would say the man is a thief, he’s a murderer, he’s a cultist, he’s “ntiang, he's nkwong!”, he has embezzled and mismanaged fund meant for the state and whatsoever!
What are you talking about? Are you for real? This is Naija for crying out loud. Let him that’s without sin be the first to cast the stone. Not even your “Mr. Integrity” or the Magu magu fellow who oversees financial crime and other related cases
who himself steals more than ‘utere’. What we’re saying is that, “among them all, Godswil "afon akan mmo", inluding your father and mine, may be.  And that’s why they hate him.


The man Senator Godswil Obot Akpabio, Senate Minority leader, many things and former Governor of Akwa Ibom State is a man that has been so maligned and vilified, most especially by people of his own state, (His own brothers, people that once drank from his cup and shared from his meal, the people that now turn around and malign him, they sell him out to outsiders to hate and persecute without knowing why they do so.  But as the scripture says, I love it more in the Akwa Ibom dialect, 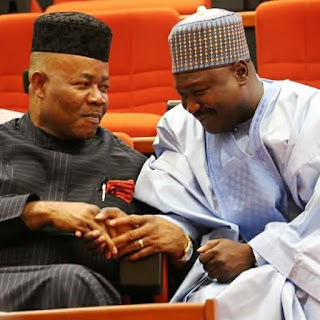 “Oh Odiodiok ono owo odo edade mei ono Pilate”. Love him or hate him, Senator Godswil Akpabio’s man whom God has blessed and as such no man can curse.

If you’re such with an ear to the ground, and you are from Akwa Ibom or just interested  in issues within Akwa Ibom, you would have heard what people, most especially most elites, political jobbers, even some clergies  of mostly the Uyo Senatorial district say or think of the man Akpabio, despite the many strategic infrastructures that completely transform the entire Uyo, Itu, Ibiono and the other LGAs that make up the Uyo Senatorial district, executed during  and under the leadership of Akpabio, which they should be grateful.

Most of you would say the man is a thief, he’s a murderer, he’s a cultist, he’s “ntiang, he's nkwong!”, he has embezzled and mismanaged fund meant for the state and whatsoever!
What are you talking about? Are you for real? This is Naija for crying out loud. Let him that’s without sin be the first to cast the stone. Not even your “Mr. Integrity” or the Magu magu fellow who oversees financial crime and other related cases
who himself steals more than ‘utere’. What we’re saying is that, “among them all, Godswil "afon akan mmo", inluding your father and mine, may be.  And that’s why they hate him.

They hate him because they know that he’s better than them all. “Even among thieves, there is honour”, and they know that Godswil is more honourable among all of them. You see it is now that I have come to grasp in clearer perspective, the corruption bug bugging everyone in Nigeria. “All have sinned and come short of the glory of the Lord” Shikena’n! Even in the next ten generations  of the unborn offspring of a Nigerian, hardly would there be any born without the corruption gene in his or her DNA! All have sin remember! That’s the bitter reality with us all as Nigerians, let no man
think he’s holier. 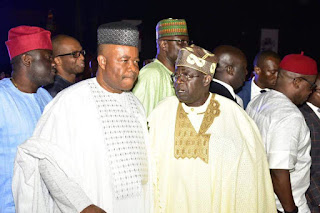 Yes everyone in Nigerian is stained one way or the other, that even among the “puritanicals” or those that claimed to be holy, you would rather have Akpabio’s  koboko and burden  than all these their own! That’s why they don’t like him, because he’s better than them all. His liberality, compassion, generosity, the feelings of genuine care and the lifting up of fingers so that things would be better with someone else, especially the less privileged That’s why they hate him.

They prefer the status quo where one would go to them every day to bootlickers and at the end of the day they managed to find you a day's meal and just transport enough to return tomorrow, as they continue to beat their chest that they are doing something for you. God pass them, that’s why Akpabio is better than them all.

They accused him of wasting money. Nevertheless, what did he do with this money? Are there people in Akwa Ibom state, who have seen the sun shine, whom if not for Akpabio, may be, even for a thousand years to come, light and sunshine wouldn’t have shone on them and their entire generation? The answer is an emphatic and an affirmative YES because God knows how he does his things, Akpabio came on board and now some hate him. For what, why should you hate him?
Do they hate him for opening their eyes and that of their unborn generation to good governance?  Do they hate him that they have now started un-burying their money from the ground where they used to keep it endlessly and non-profitably and started building good houses for themselves and in their respective compounds? Do they hate him because they have now started living a good life and using modern facilities? Why do they hate him? Just tell me why!
Ok, I now see why you hate him! You hate him for using Akwa Ibom state’s money to lift us all up and out from the psychological dungeon of the “etok syndrome” that had bastardised and conditioned our psyche to accept and think less of ourselves, to where, like the Israelites, others from other state now just want to be associated or have something to do with Akwa Ibom state.

Do you think that it is such a cheap feat to have accomplished what Akpabio  accomplished as a governor and now a Senator? If you don’t know, let me educate you, these are what Senator, Dr. (Chief) Godswil Obot Akpabio has done for us as a people, which we should be grateful for. A dynamic, sophisticated, well-groomed/cultured, sociable, charismatic leader that emerged in our time to rescue us from the mediocrity life that had characterised us as a people, a revolutionary thinker with a clear-cut emancipation agenda of his people that brought the whole world to Akwa Ibom in his time. And if you still don’t know what Akpabio is worth, let me tell you, the entire states of the North would give anything whatsoever it takes to just have Senator Akpabio as their leader, even if it’s  just for two weeks, an Abuja based Barrister from Borno state said recently.

We now know why they don’t like him, like some sadistic parents that have everything yet don’t allow their children to enjoy them. Balderdash! If all them criminal politicians in Nigeria, the likes of Senator David Mark, Bukola Saraki, Tinubu, OBJ, Donald Duke, Victor Attah, Chimaoroke Nnnamanni, Orji Uzoh Kalu and a whole lot of more greedy others are like Godswil Akpabio, I wouldn’t mind that they steal all the money in Nigeria and be given a trillion at the Senate , as I am confident that the money would still be used and ploughed back into bettering our society, not like you and your fathers’ that do not steal, yet Millions keep disappearing from the tresury, we are still hungry, nothing that suggest anything is happening at all. If Akpabio is a thief, I think we would be lucky to have that kind of a thief “They hate him because he has come to open our eyes but he’s better than them all”, Ndifreke from Mkpat-Enin contributed.

Toney Etido is the President of Conscientious Annang People's Assembly (CAPA)
at May 07, 2018