Weinstein's Sex Trial, Bill Cosby’s Not Victimization after all! 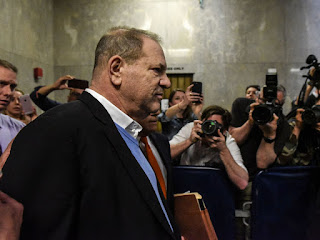 With famous Hollywood producer Harvey Weinstein appearing in court in New York to face a number of charges, including rape and a criminal sex act, those who were holding the opinion that Bill Cosby’s was a victimization and a ploy by the whites to pull down successful blacks can now confined such thought to the dustbin.

Weinstein appeared in court in New York yesterday to face number charges, including rape and criminal sex act. The charges are because of the incidences with two women in 2004 and 2013, first brought against the 66-year-old. It then followed by several other allegations by dozens of other women, that it led to the formation of the #MeToo movement last year.

Weinstein surrendering himself in Manhattan to the authority did not speak to reporters as he entered the police building with dozens of cameras taking pictures.

With many opining that, like Cosby, Harvey Weinstein will not go down without a fight, one is left to see how the whole case against the producer churns out with the mirages of women who would be testifying against him.

Though he was handcuffed, but he appeared to be smiling without saying a thing. At a time he was also seen carrying a book into the station, living people wondering what book he was carrying

He however, posted $1m bail bond in the court, as an electronic monitor was put on him and he surrender his passport and restrict his travel to New York state and Connecticut alone. He was looking pale in court as he listened to Manhattan assistant attorney Joan Illuzzi-Orbon describe him as a man who had "used his position, money and power to lure young women into situations where he was able to violate them sexually".

His lawyer Benjamin Brafman said afterwards that he would be pleading not guilty, adding that they intend moving very quickly to dismiss these charges.
at May 26, 2018