Cultist Killed Rival, Cut off Palms and Sell For N5,000.

Cult menace in Nigerian Cities is taking yet another dimension, with herbalists now enlisted as the third columnist of the game.

A suspected cult member and murderer with the name Kayode Oreneye was on Wednesday paraded by the men of the Ogun State Police Command, for allegedly killing one Shakiru, a member of a rival cult and selling his body part to an herbalist for N5,000. 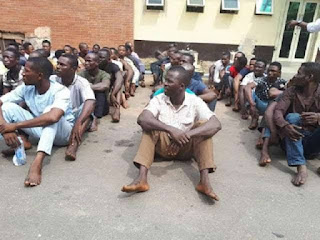 The suspect who is 27years-old claimed to be a member of the Aiye Confraternity. He told Journalists in the command’s headquarters, Eleweran, Abeokuta, that his late victim, who went by the name Shakiru belonged to a rival cult, Eiye. He also revealed that the deceased had attempted to kill him on three occasions, but he escaped.

The suspect, who is also the father of two also claimed that the deceased had prior to meeting his end, had killed three members of his Aiye cult.

Oreneye confessed to shooting and killing Shakiru at Library Junction, Ilaro, on February 12, 2018 in a reprisal attack. He also admitted to selling the deceased’s two palms to one Jimoh, a herbalist for N5,000.

“It is true that I shot and killed Shakiru because he killed three members of our group. Again, he made attempts on my life on three occasions, but I escaped; I had to quickly strike before he could strike again.”, the suspect stated

The state police commissioner, Iliyasu told journalists that the suspect was arrested at a drinking joint in Oke Ilewo, Abeokuta. The police commissioner also used the occasion to tell owners of hospitals and other medical centres not to reject anyone with gunshot injuries. He, however advised that they should report such cases to the police immediately after the admission of the victim.

“Owners of any medical centre or hospital who reject victims of gunshot wounds will be arrested and prosecuted accordingly,”, the Commissioner added.