An Archbishop in Australia has been convicted for covering up child sex abuse in his church. 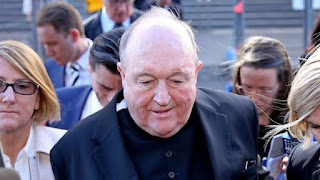 A 67-years old Archbishop of Adelaide, Australia has been found guilty of concealing child sex abuse he is privy to by a priest, making
him the most senior member of the Catholic Church to be convicted of such a charge. The Adelaide archbishop now faces up to two years in prison and is due to be sentenced by an Australian court in June.

According to Australian Broadcasting Corporation (ABC), The 67-year-old was accused of covering up abuse by another priest, James Fletcher, after he was told about it in 1976 when he was the then assistant parish priest in New South Wales.

Though the archbishop's lawyers had argued that their client did not know Fletcher had abused a boy, but the court in a statement in Newcastle, New South Wales, stated that Magistrate Robert Stone had ruled the offence "proven". The Magistrate stated that “I would not accept that Wilson could not remember a conversation in 1976 - when a victim who was 15-years-old – had described how he was abused by Fletcher a few years earlier”

Fletcher was who was said to be in the habit of abusing minors was previously found guilty in 2004 of nine counts of child sexual abuse and died in prison two years later.
.
Wilson who expressed his disappointment at decision of the court said he would consult with his lawyers to decide his next steps.

The ruling is as a result of five years inquiry into allegations of child sex abuse in Australia, following similar allegations around the world that churches are in the habit of protecting airing priests by moving them from parish to parish.

According to findings by government inquiry, 7% of Catholic priests working in Australia between 1950 and 2010 had been accused of child sex crimes and that almost 1,100 people had filed child sexual assault claims against the Anglican Church over a 35-year period.
More from World

Wilson's conviction comes after Australian George Pell - the Vatican's treasurer - was ordered to stand trial on historical sex charges. He is the most senior member of the Catholic Church to do so, which he denied any wrongdoing.