Kanye had thought that the dragon energy affinity he shares with United State President, Donald Trump is something worth pointing out, never did he knew that a whopping nine million fans would be deserting his side of the ring for what they consider "aligning with the enemy". In a released screen chart with fellow musician and long term friend, John Legend, the Soul music icon pointed out to the Yeezus concept creator his guff by aligning with Trump, whom he said his policies and tongue hurts a whole lot of people, most especially people of colour, calling on him to reconsider his support or risk sending the wrong signal to his fans as supporting what he once was against, which he added might affect the legacy he has achieved. 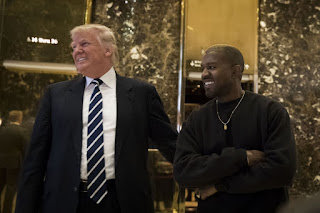 And  though, West felt that John's call and bringing his fans into the mix is a fear tactics geared toward controlling and manipulating his thought, but he appreciated his cconcern anyway.

And though it was not known how fellow creatives and others who look unto Kanye West as an icon of creative art and self empowerment would feel with this unholy alignment, it was Rihana who first pull the plug by unfollowing the collage drop out on twitter before others started following suit, and before we know the count has rising to a whopping nine million. Though many have argued that it was just one of his publicity stunt to promote a new work about parents handing over white supremacist ideology to their wards, but with fans deserting him, who would be there by the time he is done with the promotion?
at April 27, 2018