"Mama was a good woman" was all everyone, including Church and community members were saying at the very emotional tensed atmosphere, as Wisdom Udoka, former Head of Survelance at the Akwa Ibom State's Ministry of Women Affaira and his siblings laid their mother, late Deaconess (Mrs) Matha AU Udoka to rest today in their country home, Itak Ikot Udo, Ikot Ekpene. And because a Liones cannot give birth to a goat, Wisdom and his siblings were equally not left out in the eulogies gallow that accompanied their mother to yonder,  as everyone who trooped the burial ceremony because of either Wisdom or any of his siblings kept narrating how they had at one time or the other benefitted from the benevolence and goodwill of the Udokas at one time or the other. 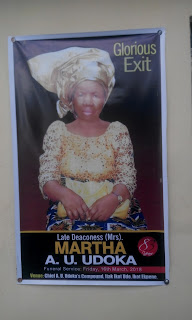 Mrs Udoka who passed onto glory toward the winding off of last year, 2017 was laid to rest today in her residence, Itak Ikot Udo, Ikot Ekpene, Akwa Ibom State in a grand style amidst fanfare and celebration of a a life well spend of a full ripe age.

With all her children, son in laws, daughter inlaws,  grand Children, her husbands family and their village, Itak Ikot Udo, her relations and well wishers fully and well represented in the event that was excellently organised and well attended, one could only but pray and desire that all families can be like that. The "who is who" in Akwa Ibom state and Ikot Ekpene all graced the occasion. 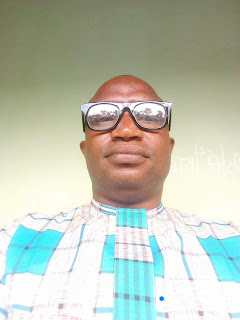 Speakkng to your Darling 9ja friendly platform, FriendsOfNaija, Mr. Daniel Umoren, who spoke unbehalf of the Lagos base  attendees, spoke so highly of Mr. Wisdom Udoka, whom he said "he' s a dependable ally and pillar to anyone who sort his help and assistance in their hour of need, thus the reason the place was jamb-packed with people from all works of life and places in solidarity to a man that would do likewise should it be the other way round", Mr. Umoren testified. People from Calabar, Abroad and others were all represented.
at March 16, 2018