Traders in Akwa Ibom State have resolved that Governor Udom Emmanuel remains the most traders-friendly Governor in the country for fulfilling his promises to them and as such, deserves their support for another term in office.

This was the general position by the different leaders of traders’ associations during a rally at the Etaha Itam Market at the launching of the second phase of the state traders interest-free loan scheme.

The current scheme involves 5000 benefiting traders, with a total of N300 million floated by the state government, with each beneficiary getting between N100,000 to N500,000 while cooperative organisations get as much as N1m each. 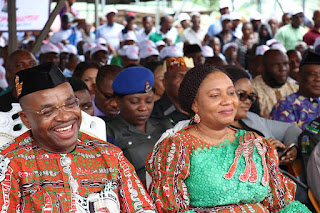 Speaking, the President, Market Women Forum Association and Women Leader, Akwa Ibom Traders Association, Magdalene Udom, Chairman, Board of Trustees, Etak Itam Market, Elder Godwin Ebong, and the President of Ibom Timber Dealers in their separate goodwill messages, expressed appreciation to the Governor for keeping his campaign promises to both the traders and cooperative societies in the state.

They said that traders have benefited from his administration, especially the interest-free loan scheme, ticket-free day to the traders and appointment of a trader as his Special Assistant on Traders Matters.

In an endorsement across border, the Chairman, National Association of Abia State Traders, Mr Emeka Ikhana expressed delight in the rapid infrastructural developments recorded in the state, and lauded the Governor for his pact with traders.

The Special Assistant to the Governor on Trade Matters, Akparawa Idorenyin Raphael, thanked the Governor for lifting the sufferings of traders in the state, saying that he has done more than his campaign promises in 2015.

“His Excellency, you did not promise to give us ticket-free day, but you, as a listening governor, harkened to the cries of market women, and declared every Thursday as ticket-free day for all traders.”

“This is the first time in the history of Akwa Ibom State that a market is built for traders for free. We are solidly behind you come 2019 and beyond.”
The Governor in his response thanked the traders of the state for their support to him and promised to continue providing enablers for the successes and growth of businesses in the state. 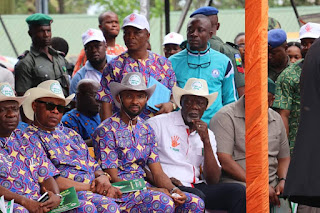 He charged beneficiaries to ensure prompt servicing of the interest –free loan, maintaining that this will enable the scheme to revolve to other intending beneficiaries and announce a donation of a bus to the leadership of the women association of the traders.

While urging the traders to reciprocate government gesture by mentoring younger traders to grow, Governor Emmanuel promised to sustain more trader-friendly policies throughout his administration.

He further promised the traders of his administration’s commitment in tackling the challenges of the traders and directed the Commissioner for Works to immediately commence work on the drainage at the Etaha Itam market.

Commissioner for Finance, Mr Linus Nkan explained that the Micro, Small and Medium Scale Enterprise loan is one of the numerous schemes of the Governor Udom Emmanuel-led administration which aims at building entrepreneurship and support to the expansion of sustained indigenous businesses of Akwa Ibom people.

The Chairman of Itu Local Government Area, Barr. Etetim Onuk, in his welcome message, congratulated the Governor for the well-earned endorsement by Akwa Ibom State traders, and stated that the people of Itu LGA are solidly behind his second term bid.

“I stand here to declare that Akwa Ibom State has witnessed a turnaround in various areas including infrastructural and human development, result-oriented policies leading to the establishment of home-grown industries that have contributed to a reduction in unemployment rate.”

Highlight of the event was presentation of cheques to beneficiaried of the loan urging them to ensure that the money is put into good use.