President Mohammadu Buhari’s obsession with “only his own" understanding of the concept of corruption and the Nigerian elderly people’s mentality that the aged are always right is fast becoming a thing of mockery and embarrassment to Nigeria before the international community. This Obsession has now made our President to exhibits traces only seen with dull student who thinks he sees opportunity in the open work of a brilliant student only to proceed and copy everything, including the name of the brilliant student, to his own foolishness. 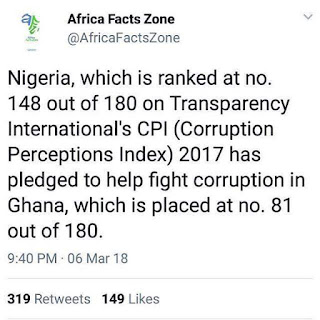 Immediately our President finished his address to the people of Ghana and promised to help Ghana fight corruption in the event of the country’s Independent anniversary yesterday, I reached out to some of my friends who now resides in Ghana to enquire of what the people of Ghana thinks about such generous offer by the president of a country, whose country and people, including members of his cabinet are neck deep in corruption! The first person I reached out to was categorical and did not minced word, as he declared that “the President is a bunch of joke, living in his own “fool’s paradise”. He went on to offer his Ghanaian friend, who happened to be there with him at the time the phone and the Ghanaian corroborated what my friend and majority Ghanaians thinks, with even a much more derogatory term, describing the Nigerian president as “somebody in a trance or possibly dreaming”. 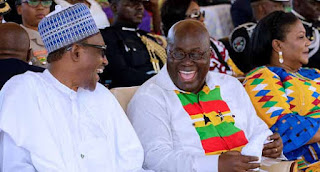 “With Nigeria ranked at no 148 out of 180 on transparency international’s CPI (Corruption Perception index) now offering to help Ghana that is ranked at no8, it only leave people wondering whether the man thinks that we Ghanaians are like Nigerians that cannot decipher issues and call it for what it is because of sentiments and blind affiliations!”, a distraught elderly Ghanaian woman from the Volta region stated.  “With international “goofs" like this yet again from President Buhari, it only shows that, either the President is a stubborn person who doesn’t listens to his handlers, or either his handlers are just bunch of lazy fools, who continually set the President and the country up for disgrace!”, a Nigerian living in Ghana pointed out.

The Nigerian President has through his body language and blatant disregard to his countrymen and women’s opinion, make ship-wreck of what he was known for and the good will and trust the Nigerians had in him when they voted him into power in 2015. The President is now considered a very corrupt and insincere person, as his words hasn’t been able to match his actions. Of utmost concern to right thinking Nigerians now is the continuous embarrassment, as the President goes around expressing ignorant at the international stage.