Like the American genius and Scientist, Stephen Hawkings, who died last week requested for an audience with the Pope only to informed him “Now I believe”, before he passed on,  so also, but in the negatives, after considering happenings in the country under PMB and the APC government, lot of compatriots, most especially many who only believed in Gen. Mohammandu Buhari and his APC congregation because of the born again Professor turns politician, Professor Yemi Osibanjo, have now altered their believes in lot of things they used to believe about the Prof, Nigeria and the hope they had in the APC regime before she came to power. 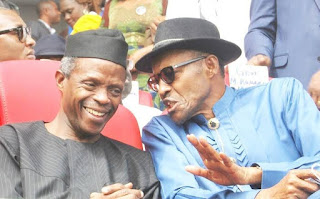 Anybody at all who had any iota of believe in APC and her Presidential candidate prior to the 2015 general election, most especially the learned and informed West and others across the country only did so because of the emergence of Professor Yemi Osibanjo in the political equation. Many believed that because of his understanding of the world, social savvy, knowledge of law, fear of God and integrity, he would at least bring his influence to bear in the many anomalies that goes on in the secrets, they call governance in Nigeria. So if the truth be told, you would realise that lot of people who supported and voted for APC did so not because of Tinubu and the other political heavy weight in APC but solely for the Prof. Nobody, knowing Buhari’s past record of nepotism, religious extremism, lack of education and charisma required of a leader, incompetence and social savvy would have given the General any chance, but for the Prof and the many professionals whose deafening voices were beginning to cry against the confraternity parade call PDP. Nobody knew Buhari for anything good beyond fighting corruption, and you would have to agree with me that Buhari’s incompetence is as worse as corruption itself. With latest unfoldings in the country, like the brutal used of force and proscription of IPOB as a terrorists organisation, the refusal to proscribe the deadly Fulani Herdsmen who have killed thousands of Nigerians, including children and security personnel, the many blatant disobedience to competent courts and rulings, selective fight against corruption, lopsided appointments and appointment of incompetent people in sensitive positions, the clamping down on the press and denying the press information on the state of the nation and government officials, despite FOI law in operation, the many incompetence and failings of this administration and many other more jagons that continue to make Nigeria a laughing stock in a democratic government that has a Jurisprudence university lecturer as the number two man  in command and a former governor of Lagos State, a law officer himself with the high rank of “SAN” and many, whom we used to hold in high esteem as members of cabinet, one is only left to wonder if the VP and the likes of Fashola still in this government still believes in their convictions and beliefs about democracy, social programmes, rule of law, democratic tools and institutions as they used to propagate? What has happened to the very fine ideological and principled Professor and many fine politicians in this government we were anchoring our hopes on that they would salvage our situation? Is the Prof and others men of integrity in this government under some kind of blackmail or are they under some kind of threat that they cannot disagree or offer the President any sane advice that would ameliorate this national embarrassment as we are currently undergoing! What has happened to common sense?

I only needed to sit under Prof Yemi Osibanjo once in an entrepreneurial training organised by Real Men Unlimited (RMU), the Men Fellowship of the Redeem Christian Church of God, City of David, Victoria Island in 2010 to be convinced that we still have people in the country who haven’t sacrificed their conscience on the altar of greed and wickedness, people who seeks the good of the country and her people. After that, I have attended many other events and listened to tapes that has the Prof as the speaker, as I came to believe so much in his integrity and Christian uprightness. But with the VP’s daughter marrying a non-believer, he participating in the sharing and arrogating our common wealth to themselves in the name of governance and many other stuffs playing out in our country which are not supposed to be in a democratic government, and him not opposing any, I don’t believe anymore because I don’t think he is still bind to those convictions.
at March 19, 2018