The governor who was represented by the Commissioner for Science and Technology, Prof. Nse Essien commended the organisers for bringing the event to Uyo and called for synergy between NITDA and the State government in advancing technological innovations and entrepreneurship. 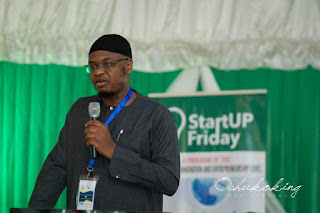 He said Akwa Ibom has a vibrant ICT community and advised  startups, investors, mentors and other ICT stakeholders in the State to take advantage of the event.

The Director General of NITDA, Dr. Isa Pantami said "StartUp Friday "in Uyo was the fourth in the series after Kaduna, Lagos and Gombe since he assumed duties.

Dr. Pantami who stated that the event was brought to Uyo because of the presence of an active ICT community announced a donation of a digital job creation centre for the State to be sited at Government Secondary School, Afaha Eket and pledged to offer more assistance to the State in the development of ICT.

He said "StartUp Friday "was aimed at identifying young ICT innovators and entrepreneurs for support.