"Inter-House sport is aimed at helping students discover their sporting talents and also improve on their physical fitness. Extra-curricular activities are the essential ingredient of the overall education process. As the saying goes, “Sound bodies possess sound minds”.
“I am happy to announced to you that among these students before you are the future Usain Bolt, Mary Onyali, Samuel Peters, Ronaldo, Messi and etc. this belief was confirmed when eight of our students who participated in the just concluded Akwa Ibom State Youth Sport Festival came back with medals”  “Your presence today has assured us of your interest in the all-round development of your children. I have no doubt our Children would be at their best knowing that you are cheering them” , those were  some of the words that formed the Principal’s address, Mr. Philip Dominic Umoh, as Community Secondary School, Ikot Abia Idem/Ikot Ewang took to the pitch to compete in their 2018 annual Inter-House Sport competition. 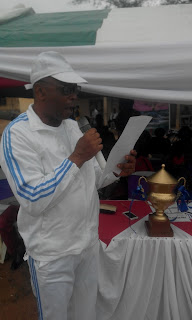 With six (6) Houses, comprising of the Blue, Green, White, Red, Orange and Yellow Houses respectively competing for the price in Matching, Fashion parade, Cultural dance, Sack Racing, Relay, 4/100 metre (male & female) and lot of other sporting competitions, including other side attractions, the 20018 Annual Inter-House Sport with Mmeboko of the famous “Mmeboko Fitness Club of Ikot Ekpene city providing the commentary steam that spiced up the Sporting event, parents, teachers and well-wishers who graced the event couldn’t have asked for anything better.
At the end of a keenly contested, entertaining and well organised competition that witnessed young people breaking their nerves to outwit each other, the technical officials not losing their sights on any hook, winks and tricks Athletes do imbibed sometimes in competition to torpedo their opponents, Senator Emmanuel Ibok Esien House aka the Green House emerged over-all winner with the over-all point of 237, while the White House emerged the 1st runner up with a total point of 218, Blue House, 2nd runner up with 194 points, Red House 4th with 191, Orange 5th and the Yellow House emerging last in the over-all competition with a total cumulative point of 162 points. 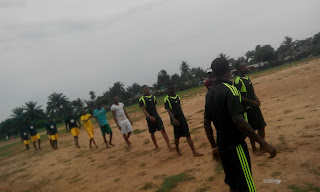 Speaking to your 9ja friendly platform, FriendsOfNaija, Mr. Nseowo Peters, who represented Senator Emmanuel Ibok Esien in the 2018 annual Inter-House competition praised the School and organisers for putting up such a high standard sporting event. Mr. Ifiok Umoh, the Red House master also expressed satisfaction with the standard of the School’s Inter-House sport and praised his house, the red House for putting up such fighting spirit despite only clinging the forth position. He admonished his House’s boys and girls to look forward to doing better next year. The Principal, Mr. Philip Dominic Umoh, who is overseeing the second inter house sport since taking over as the Principal of Community Secondary School Ikot Abia Idem/Ikot Ewang also expressed satisfaction with the standard and promised to deliver even much more standardise Inter-House Sport next year.
at March 23, 2018