Uniform Men Oppression, Woman and her Children Beat Up Police Officer Who Was Bullying Her Husband.

It was a case of "we can't take it anymore" yesterday at St Vincent, Umuahia Road, Ikot Ekpene, Akwa Ibom State, when a woman, who apparently had had enough of a police Constable' bullying her husband for no just course. 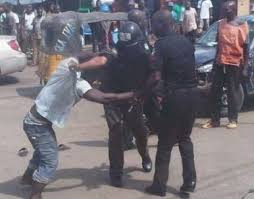 The woman, who was returning with her husband, a retired police officer himself from a function were flaghed down by the police man, who thought that holding a gun and wearing the black uniform is a licence to bully and abused civilians. As the retired police man, name withheld maneuvered to bring the vehicle to a halt, it was a massive hit on the vehicle that they heard. As the woman tried enquiring from her husband's former colleague, the reason he hit and dented their bus the way he did, despite her husband obeying the order to stop, the police man slapped the woman, and threatened to shoot them for a mere word which did not constitute an offence. 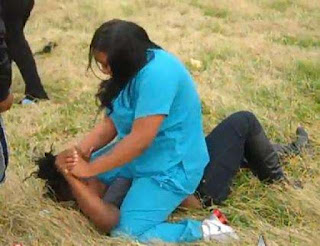 he woman, who couldn't stand the sight of her husbands being humiliated the way he was being treated, got provoked and threw caution to the wind and engaged the arm police man, until she and her children were able to disarmed him. What follows was a free beating for the police man, as the woman and her children, including passersby joined in taking their pound of flesh on the the police man.
at February 03, 2018