SECURITY IN IKOT EKPENE AND THE WISHFUL THINKING OF BUSINESS OWNERS!

(Ban On Motor Circle Operators From 7pm And The 7pm Curfew, A Dis-Service And Punishment To Law Abiding Citizens And By Extension Hurting our City)


The on-going cult war and security challenge in Ikot Ekpene which is claiming lives and hampering on the smooth flow of activities has gotten to a stage that un-ward thinking and proactive community leaders, business owners and all stakeholders of the Ikot Ekpene city and the Annang nation should do something proactive to halt, less, the hope of building a metropolitan city would elude us all, and of course business owners and the tribes’ men would suffer most.

It was Modekai in the Bible that told Esther, the then revered queen that, “If you think you are safe because you are a queen, living in the palace, and as such won’t do a thing to avert the impending disaster coming, then you have figured it all wrong and blab bla bla…..” we can today, in the face of this daunting threat to our city, also re-direct same poser to the community leaders and business owners in Ikot Ekpene, who have chosen to remain “docile ‘ly’, silent in the face of these incessant security challenges which has turned once innocent and emerging city into a theatre of war. If our leaders, business owners and all stakeholders refuses and continue to do nothing to halt this menace, in the long run, they (Business owners) and we all would be worse for it, as people who are supposed to be the target for your businesses would prefer to go to a most safer and non-restricted place than here. The police’ blanket ban on motor circle, which is the only mode of public transportation and the curfew of 7pm is the nail that would completely killed the city’s social activities and the city at large than the security challenge itself, this the stakeholders should reject vehemently. It has nothing to do with the police carrying out their constitutionally professional duty, it rather portrays lazy approach to policing instead, punishing all for the sins of few. What do the police mean, are they not aware that people can returned from work either from Uyo or anywhere within the state, sometimes as late as 8, even 9 and more? Does that make them suspects if they are caught against the curfew time? How are the people supposed to get to their respective homes, since motor circle which is the only public transport system in the city is banned?  Haba na! ah ha!  Which kind oppression bi dat? Wetin we do? 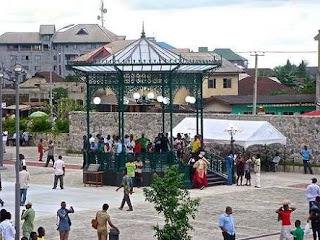 There is no doubting the fact that social values is in its all-time degradation level and institutional failures are increasing on daily basis, but come to think of it, these people (cultists/criminals) live with us in our communities, and are known by members of the communities, and as such should be fished out, handed over and ensure they are not released by the police, as we know the custom is. Law makers must legislate at our House of Assembly as law, and government must formulate stiffer penalties and policy that discourages this menace, except we don’t want this emerging metropolitan city that is trying to emerge!

CURBING THE MENACE OF CULTISM IN IKOT EKPENE THROUGH PROJECTS THAT CAN TAKE THE YOUTH OFF THE STREET AND ENGAGED THEM POSSITIVELY!
Government and policy makers must evolve strategic pro-active “actionable” programmes that would detoxify, and re-orientate our young people from being members of destructive organisations that trap them and make them do things they shouldn’t be doing. We must create and integrate our young people in sustainable and effective programmes that would transform them to being useful to themselves, family, community and country. We must rethink and look at the evolution of the institutions of socialisation, such as the family, the school and the neighbourhood. The “protagonism” or challenges of young people in our communities’ today is forcing us to rethink the relationship between the value system of the generations of our fathers, ours and formal education, which is necessary albeit not sufficient for accurate social behaviours as requested for a sane city. Our learning system and things that forms our value system today have somehow, transform our schools into a factor of exclusion and a place where violence is learned and approved as a tool of survival on the street, and some neighbourhoods a breeding grounds for organised crime. Parents, teachers, and local leaders are often not prepared to face the changing scenarios. The evolution of technology has created a universe of new forms of communication which furthermore, create the gap between generations. We must creatively and collectively stop this destructive wind!
at February 28, 2018