Obasanjo's Coalition for the Emancipation of Nigeria Launched in Abuja

The long awaited coalision for Nigeria movement has formally been launched by the Former Governor of Osun state, Olagusoye Oyinlola. The Coalition for Nigeria Movement (CNM ) was launched in Abuja amidst fanfare and hope. The former governor, who is the coordinator of the movement said that the coalision is not tied down to a political party and stressed that the organization is just a "movement."

The event, which held at Musa Yar'adua Center, was attended by young Nigerians from all walks of life. The coordinator stressed that he has not renounced his membership in All Progressives Congress (APC) adding that there are two different things between a party and movement.
Oyinlola explained that Coalition for Nigeria Movement is not a political party but a movement and there is need to run fast and ensure that the movement is carried into the nooks and crannies of the country.
"The aims and objectives of the coalition, it makes it mandatory for us to hit the ground running. Time is not on our side and if we are going to effect the aims of the coalition them we must run fast " 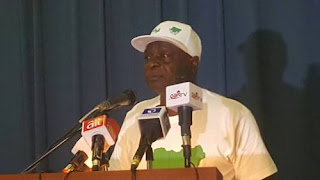 He emphasized that the desire of the movement is to see the new Nigeria noting that there is a need for synergy between all the movement in the country to achieve a common goal of giving the leadership of the country to the knowledgeable and vibrant young men.
The former Governor pointed out that the old ones in the coalition would be like the guardian angel while the young ones would be in the driver seat and steer the ship of the country.
"What we are trying to do is like a guardian angel, it is you that must decide who is to do what and at what level. That is why we are having this meeting today and putting it back to you."
He explained that nobody is bringing money into the movement adding that everybody will contribute in order to avoid one person controlling and dictating the affairs of the movement. He argued that everybody must have equal say and equal decision. He debunked the insinuation that the movement is gear toward legalising the legacy of the former President Olusegun Obasanjo.
In his own remark the former Governor of Cross River State, Donald Duke said that we don't have a political party in the country but platforms making people crisscross from one platform to the other seeking for office. 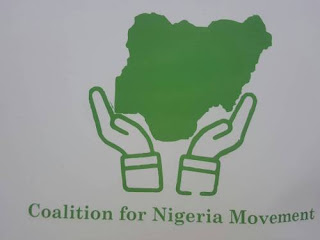 "What they are doing is seeking office not implementing a thought. But we also aware that a new generation is at the vanguard of taking over and why our own generation is stepping back as Governor Oyinlola said. The new vanguard will lead but we step back and perhaps guide and share our experiences which may serve as guide to the new generation."
He maintained that the new generation needs mentorship and if they failed to prepare the next generation for the leadership role the country is doomed.
He also noted that All Progressives Congress (APC) and Peoples Democratic Party (PDP) have not been able to meet the aspirations of Nigerians adding that there is need to reevaluate and recalibrate ourselves in order to make progress.
"We hope this clarion call will resonate throughout the length and breadth of our nation and we hope everybody in this hall and those of you streaming live will be party to this movement" Duke stated.
Former PDP Chairman Amadu Ali and Akin Osuntokun a former spokesperson for ex-president Olusegun Obasanjo were also sighted at the event.
at February 01, 2018