Just as every administration has had to grabble with its own challenges, there’s no doubting the fact that, apart from under-performance and the other general failings of this administration as everyone can see, the Fulani Herdsmen menace has become the major challenge of PMB's administration. The Herdsmen challenge and the government’s handling of the situation has rather witnessed the whipping up of sentiments that has ended up presenting a sharp and well pronounced divides between the Hausa/Fulani vs the rest of us Nigerians, sometimes, the North vs the South, and in some most extreme cases, The Christians vs the Muslims.

And no matter whoever you are as a
Hausa/Fulani, you have automatically become the target of every Nigerian and an enemy that we the rest of Nigerians would have to protect ourselves from, even as the “We vs Una” situation they have succeeded in creating settles deeply in the awareness of every Nigerian. 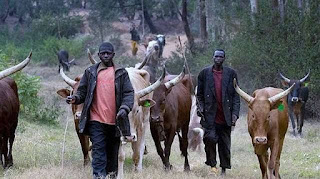 But be it as it may, the Fulani herdsmen and their Hausa brothers are not our enemies, no they are not. They too like every one of us have had to go through the same rat race pattern of survival process handed down and sustained over the years by our successiveelites and governments. These people are the real enemies, not that Herdsmen or that Hausa man that’s just like you, struggling to egg out his own survival. If they had done what they were supposed to do, developing and expanding on what they took over from the colonial masters, we wouldn’t have had this present challenges we are facing today. What I’m inferring here is that, we should look beyond our current challenges and start looking at what our problems are, where they all started from and who our real enemies are. Our real enemies are our leaders, who refused to do the needful over the years. These include Buhari and everyone that has ever mounted our leadership seat and saddled with the responsibility of moving our country forward but failed. These people are the real herdsmen that we should direct our pains and grievances toward, not those seven Fulani travellers, nor are they those Northern settlers in our respective communities or those in their own respective states.
It’s funny how we could so easily pick on any poor Hausa/Northern person we see in our domain, just like witnessed in Gboko, Benue State recently when seven Fulan men travelling and their vehicle have to branch by a filling station for refuelling, which eventually led to their destruction in the hands of fellow aggrieved citizens, who have had years of accumulated pains and hatred generated by the actions and the inactions of our successive leaders and system, stored up in them, as they now misdirect them toward the wrong persons. When my Friends Moulud Tahir, a Shua-Arab man from Borno and Abubakar Inuwa, a Fulani man from Adamawa called my attention to the dirty carnage currently playing out in our country, we went down memory lane and remembered how we used to run around the streets and bushes of Borno, including the inglorious Sambisa Forest and other Northern states, without minding where we were from, but the comraderies of humanity keeping us. We fear this is a major part of us being decimated gradually and forcefully taken away from us; we fear our children and the coming generation would not experience or know the place of the aspect of co-existence and tolerance of others not like us. We fear the wrong people are killing the wrong people, we fear we are being misrepresented, as well as being misidentified, the Fulani/Hausa man and woman you go and killed or planning to go and kill as reprisal is not the Fulani man that annihilated you and your wives and children, no those are not the ones.
at February 04, 2018