“It’s a dream that took me so long to realised, but I’m grateful to God almighty that finally it has materialised and it has come to stay”, those were the exact words of Frank “The Next Big Bang” Abasiekong, the Chief Executive Officer (CEO) of Konsol Kraft studio, as they officially opened for business on Valentine day, Feb, 14. 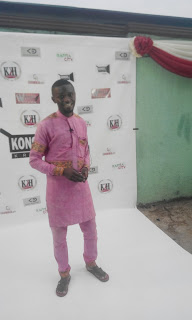 In an event that serves as the icing on the love atmosphere that had seized the day, friends and well-wishers who came to felicitate with Konsol Kraft expressed optimism over the height they believe and envisaged Konsol Kraft would attained, considering the competence, professionalism and the innovative prowls  that Frank and his team are known for. Konsol Kraft Studio’s service includes: Training, Cinematography, photography, audio and visual production, which includes film making, tv/radio programming, editing, after effect, etc.  Frank’s Resume includes, first and second degree in theatre are from the University of Uyo, a diploma from PEFTI, Lagos and another diploma from Africa’s foremost film institute, Nigeria Film Institute, (NFI) Jos, Plateau State.