ALAS, OWNERS OF RITMAN UNIVERSITY AND OTHER RITMAN HOLDINGS REVEALED

It all started like an innocent child’s “horse riding” his wishes, but like every good dreams which they say is like a seed that never die, the Ritman Holdings, One of Nigeria’s foremost education and other business ventures, have come from merely wishing, to actually conceiving, developing from the scratched and nurturing many schools, including a licenced private University, The Ritman University, Ikot Ekpene, to a highly yielding and very profitable venture that is currently employing thousands of Nigerians and expatriates. 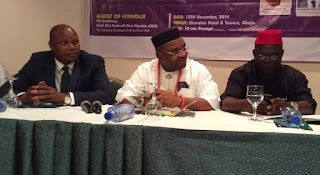 According to a press release from the School, title “RITMAN UNIVERSITY”, Senator Emmanuel Ibok Esien, the proprietor and the Chairman of the University Governing Council had earlier envisaged in 1970 after the Nigerian Civil War that the forest, which used to be shared to members of the community on “plant- and- go” basis should become a school. And even when government established a technical college in 1978 in his community, Ikot Abia Idem, and not in his dreamt spot, the dream lived on.

Alas, like a fairy tale, after several years, the young dreaming lad, then “whatever”, but now Senator Emmanuel Ibok Esien acquired the entire forest and more land from the original owners, and went on to partner with Eng. Sunday Inyang and his wife, Rita, whom he said they met by providence, to start what is known today as Ritman Group of Schools, comprising of a modern Secondary, Primary and Nursery Schools respectively, and later crowned it up with The Ritman University as the tonic to cap a lifetime vision. The forest today and the massive land where Ritman seats is conveniently housing a University that is adjudged by many after operating for just a little over two years, as an institution with amazing prospect, because of her state of the art infrastructures and standard insists upon by the owners. It also house the Secondary, Primary and the nursery schools respectively, it accommodate also, staff and students’ residential quarters and every facility you can think of that makes for life.