Recently, anything that has to do with church and men of God has come under severe attack and criticism in Nigeria, no thanks to the convener of the Free TheSheeple movement and leader of the FreeNation, OAP, Ifedapo Olarinde aka Daddy Freeze’s audacity to speak out and bring to the fore the antics of some so call “men of God”, who were regarded before now as god. But after said and done, after all the criticism, logical, emotional and all kinds of arguments, including psychological, political and whatever else anyone has to throw into the mix, what remained and would remain constant is that nothing can change God and no mortal’s argument can change what God wants and expects of us, which is to strife to please him, even when we don’t seem to know what he expects of us. And at the long run, it is His (God) will that would prevail, whichever way it comes through. 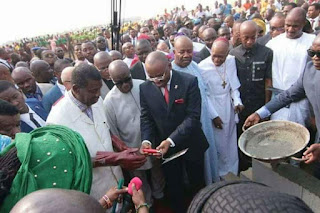 Since I returned to my state of birth, after a life time away in 2015, I have been inundated with two major arguments, which forms the bed-rock of Akwa Ibom state politics. The Ibibio-Annang age long needless feud, which I would allow for another day, and the Governor thinking he can use the church and things of God as disguise to play his way to the consciousness of the people, despite benefitting from the atrocious spoil of Gaius. And from the banquet ceremony that received the SYMBOL OF BLESSING and PEACE of Akwa Ibom State, to the Annual State’s Solemn Assembly, the unfortunate Reigners Chapel’s incident, the annual Christmas Carol, Government House prayer, The Supreme Court Ruling Thanksgiving and many a programme in the state that seem to have religious undertone, no doubt characterised the event diary of Deacon Udom Emmanuel’s administration, and such would have also characterised mine and many Akwa Ibomites, who knows and have nothing else than God as their helper, if they were in same saddle. 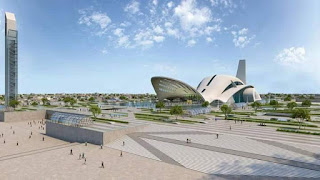 The Governor has come under severe attack from the public, majorly, those that can’t interpret the event of our time as a people. Either you accept this fact or not, we were once a people condemned to doom and destruction as a result of the actions and the inactions of our fore-bears and leaders, who knew no God and weren’t doing all these things that the Governor is doing today. And the only remedy for us now should be what the governor is doing, consciously and conscientiously working and walking us back to God’s mercy, so that when our unborn and coming generation comes, they would have an improved state with Godly foundation where they can built a prosperous state and their time on. The reality on ground is that, as many that have their logical and analytical ability to criticised the governor, either base on fallacy, fact, inaccurate or accurate reasoning for using state funds to serve God and helped project our state to be easily recognised and identify as the Christian state as our name suggest, God has bless the Governor and his generation for this singular act, (you can go and argue that with your yard people). And if you still think otherwise, you can do well to peep into Kano, Kaduna, Katsina and other Northern states, who openly, even without any visible developmental project on ground disbursed state funds to sponsor their people to Mecca, and other religious activities that would continually identify their states’ as a Muslim state. I am sorry for you foolish Christians, who for ignorant and exigency, are partaking in criticizing this noble undertakings by the governor.

It is the legendary Karl Max that postulated that “religion is the Opium of the masses. There’s no two ways about it, hence religion becomes the succour that offers hope, protection, chastisement and caution as a correctional and an orientation institution, then that’s what  we’ll get, as spiritual investment is said to measure far more than mental and what your human reasoning can wrapped around. The hall mark of a complete leader is to acknowledge and have place for God, to understand that seeking God is far better rewarding investment.
Of the 36 states of the federation, show me if there’s a state that’s doing better than Akwa Ibom state in term of infrastructural development and projects, despite the perceived wastage! Wouldn’t you just imagine that this wastage could be the factor, and it’s a good wastage! Making room for God! No, no, no! Allow me to dwell in this my lame, fable, ferry little tale, that lacks logic, after all who logic hep? For how long now since from the days of our ancestors that we’ve been sacrificing animals and sometimes humans to the devil, where has it left us? Hehn! Wisdom is vindicated by its result. If the things of God would guarantee us the relative peace we experienced during the recently concluded council poll, if it makes those representing us in government to consider it dim fit to initiate and execute projects that better our lives and add to our state, pay our brothers and sisters that are in the civil service and then stabilised the polity, then we should invest more and even more in religious monuments until Akwa Ibom state is turned into a sanctum of the Christian religion edifices, until the heavens and the world know and identify us as a Christian state.

Let me used this opportunity to remind His Excellency that there is still Mary Slessor’s tomb, one of the early missionaries that brought this gospel of redemption to us, the very place she lived and died in Ose Ikot oku, Ibiono Ibom LGA of Akwa Ibom that needs the next government’s available $22Million dollar to turned the place into an International Missionary Tourism sight, prayer towers mausoleum can be built, under the pattern of St Peter de’ Basilika in Rome. Let wailers go and hug transformer. Akwa Ibom state belongs to God. Adiok ano Ifot!